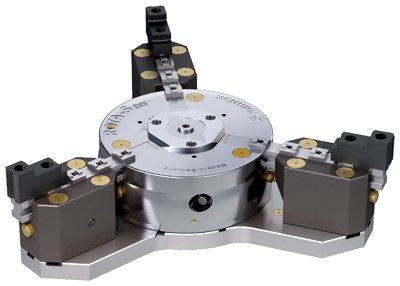 SCHUNK has developed the manual chuck ROTA-S flex, particularly for machining a wide workpiece range on mill/turn machines. It is the lathe chuck ROTA-S plus with extended guideways transformed into a large, lightweight chuck (for its capacity), which makes it particularly versatile.

Compared to conventional lathe chucks used for large clamping diameters, the weight with ROTA-S flex is approximately 60 percent of a conventional chuck with the same capacity, according to the company. At an identical table load much heavier workpieces can be machined, and due to the low height, enough space remains for the workpiece and the tools. For machining smaller workpieces, the extended guideways can easily be disassembled, considerably improving workpiece accessibility compared to a clamping application with conventional large chucks. A special lubrication system ensures permanently high clamping forces for both versions. Dirt seals prevent chips and dust from entering the chuck.

The ROTA-S flex can be easily assembled on a machine table, and by using the optimized jaw quick-change system, retrofitting can be done within seconds. The chuck clamps small parts as reliably as large ones, ensuring operator safety. The clamping solution is available in sizes 700, 1000, and 1200 for ROTA-S plus, and the manual chuck ROTA-S plus 2.0 is available in sizes 315, 400, and 500. Depending on the size, the chuck (without top jaws) weighs 170 kg, 360 kg, or 490 kg respectively. The ROTA-S flex can be combined with numerous chuck jaws from the company's 1,200 types.