Now the most requested magazine in the metalworking industry, Cutting Tool Engineering offers an editorial package that makes it the must-read magazine for industry decision-makers. Our magazine, which is published 12 times a year by CTE Publications Inc., Northfield, Illinois, is the backbone of CTE's ever-expanding digital media presence—from our website to our YouTube, Vimeo and social media channels. As a multimedia business-to-business publisher, CTE covers all aspects of the machining process, including  cutting and grinding operations, cutting/abrasive tools, metalworking fluids, the workpiece and workholders, toolholders, machine tools, software, controllers and more.

2022
CTE Becomes Most Requested Industry Magazine
As of 2022, Cutting Tool Engineering became the No. 1 most requested metalworking magazine in the industry. 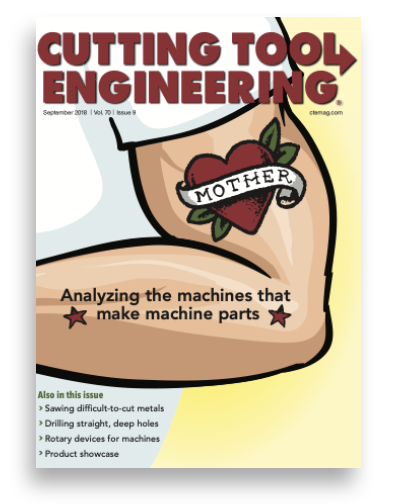 2018
CTE Publications under new ownership
Dennis Spaeth, who had worked at CTE as its electronic media editor since 2007, purchased CTE Publications Inc. in September 2018.

2014-2016
LinkedIn, Pinterest, Instagram
With each passing year came a new social media platform to include on our website. CTE's company page on LinkedIn received its first follower in March 2014. We added a Pinterest page in July 2015. And, finally, an Instagram page in September 2016.

2012
CTE launches web-based Buyers Guide
With the November 2012 issue, CTE published its 2013 Buyers Guide and heralded the debut of a searchable online version that can still be found on the ctemag.com website, as well as cteguide.com. 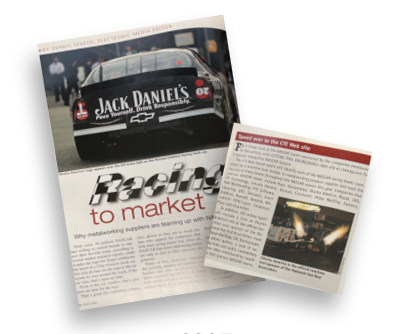 2007
Electronic Media Editor
Dennis Spaeth, CTE's current owner and publisher, joined the staff as electronic media editor in January 2007, and was first listed as such in the masthead of the March 2007 issue. The May 2007 issue included the first time the magazine published a feature article offering a multimedia sidebar online.

2000
Back to 12 issues a year
CTE magazine returned to a monthly publishing schedule in 2000, and has continued to publish 12 times a year ever since. 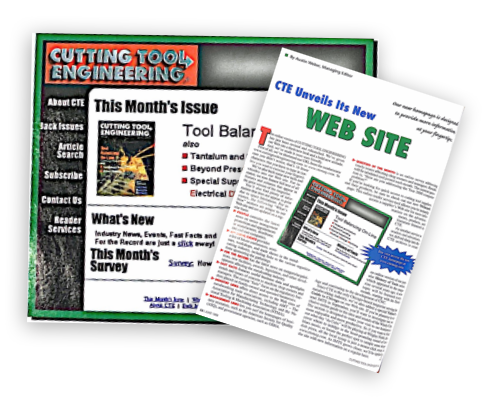 1998
ctemag.com – an abbreviated domain
Though CTE retained its previous domain name—cuttingtoolengineering.com—ctemag.com became the primary domain used for the CTE website. First published on the cover and in the masthead of the April 1998 issue, ctemag.com remains the domain to this day. CTE officially unveiled its "new-and-improved website" in the June 1998 issue.

1997
Manufacturers Doubtful of Internet's Impact
Few midsize U.S. manufacturers believed that the Internet would make much of an impression on their businesses, according to a survey of manufacturers that was published in the March 1997 issue (page 12). However, 95% of the survey participants agreed that the Internet was a permanent part of the business landscape. The findings were based on interviews with 253 top executives of U.S. manufacturing companies with annual sales ranging from $10 million to $500 million. Later that same year, in the June 1997 issue, CTE listed the domain for its own website—cuttingtoolengineering.com—in the masthead, and ran an industry news item on page 22 of the same issue that declared, "Cutting Tool Engineering can now be found in cyberspace." CTE launched the website with digital versions of magazine feature articles dating back to 1995.

1996
Digital age rising
Cutting Tool Engineering's masthead, which lists the names and titles of the magazine staff and appears within the first few pages of each issue, included phone numbers for staff for the first time in the April 1996 issue. While we can safely assume that CTE had phones prior to April 1996, the inclusion of the phone numbers in the magazine masthead signaled a changing publishing dynamic that made CTE more accessible to our readers. Later that same year, with the November 1996 issue, CTE added staff email addresses to the masthead. CTE email addressses at the time were based on the jwr.com domain name purchased by then CTE Publisher John Wm. Roberts, who created John Wm. Roberts & Associates as a management company overseeing CTE Publications Inc.

1990
Back to 9 issues a year
CTE Publications added a March issue and a September issue to the production schedule in 1990, and continued to publish nine issues a year through the end of 1999. 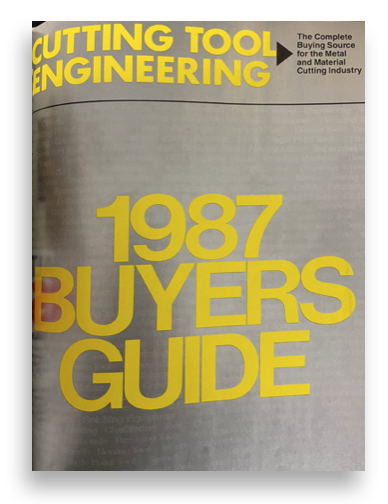 1986
Back to 7 issues – Buyers Guide Debut
In addition to its six regular issues, CTE Publications Inc. produced its first official Buyers Guide of manufacturers and distributors in November 1986, Volume  38, Issue 6. CTE continued this publication schedule through the end of 1989. 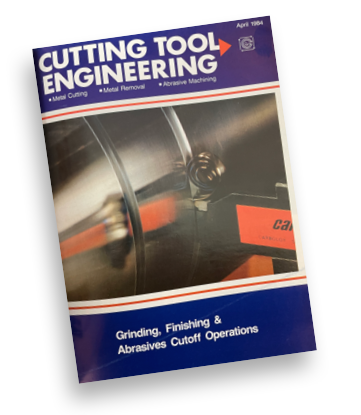 1975
6 issues a year
Technifax included the "1975-76 Annual Diamond/Superabrasive Directory" into one of its regular combined issues in 1975 as it cut the total number of issues produced to six. This publication schedule continued through the end of 1983.

1974
First Appearance of Manufacturers Directory
In addition to the diamond/superabrasive directory, the special issue published at the end of the year in 1974 also included a directory of manufacturers and distributors—a precursor to what would become our annual Buyers Guide.

1972
7 issues a year
Technifax reduced the publication schedule to six issues a year in 1972, producing combined issues for January/February, March/April, May/June, July/August, September/October and November/December. In addition, Technifax published a "Directory of Industrial Diamond Products and Related Equipment" as a special issue at the end of the year. 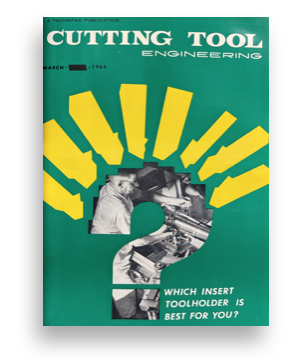 1964
9 issues a year
Technifax reduced the publication schedule to nine issues a year in 1964, and continued with that schedule through the end of 1971. As of the  March 1964 issue, CTE was no longer the official publication of the Society of Carbide Engineers, which changed its name to the Society of Carbide and Tool Engineers and became an affiliated society of ASM International.

1963
New Publisher – Technifax Publications Inc.
The March 1963 issue of Cutting Tool Engineering was the last published by Hitchcock Publishing, which was acquired by Technifax Publications Inc., also located in Wheaton, Illinois. Technifax published its first issue in April 1963, and the magazine continued to serve as the official publication of the Society of Carbide Engineers. With a July/August combined issue that year, CTE was published 11 times in 1963. 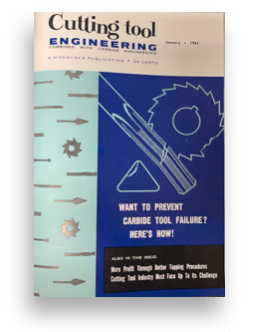 1961
New Name – Cutting Tool Engineering
The magazine officially changed its name to Cutting Tool Engineering with the January 1961 issue, Volume 13, Issue 1. In the issue, the president of the Society of Carbide Engineers discussed the thinking behind the name change: "… cutting tool engineers of the metalworking industry have a most important responsibility. Their function is to obtain the maximum productivity from industry's machines through the proper selection, application, and maintenance of cutting tools." 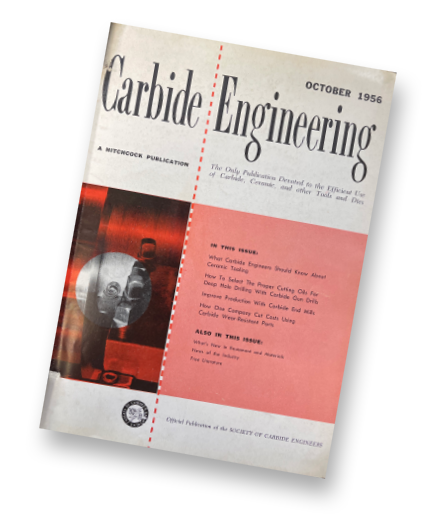 1956
Hitchcock Publishing Co.
The Hartford, Connecticut, chapter of the society produced Carbide Engineering until 1956, at which time Hitchcock Publishing Co., Wheaton, Illinois, took over the reins. In the October 1956 issue, the first issue published by Hitchcock, the society president explained the move this way: "I am pleased to write to you from our new size page and layout. The growth of our magazine from a four page sheet … to its present size, published by [Hitchcock], is indicative of the demand and the need for news of carbide and the men behind it." The final issue that year was published in December as Volume 8, Issue 6.