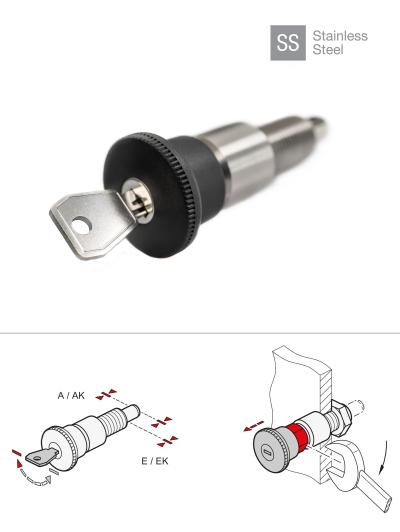 Lockable standard parts are increasingly common in machine and plant construction, but they are also used in enclosure hardware for locking and securing a variety of parts. JW Winco is now expanding its range of indexing elements to include the lockable stainless steel indexing plungers GN 814. The integrated closing mechanism protects against unauthorized or accidental operation.

Lockable indexing plungers GN 814 of stainless steel have the same basic functions as JW Winco’s tried and tested selection of indexing plungers. What’s new is the clever addition of a locking function for greater safety and security. This is accomplished with a lock integrated into the black plastic head. On types A and AK, the plunger pin is secured in the front position by turning the key 180 degrees and removing it. The plunger then cannot be moved out of the base position. On types E and EK, the plunger pin can also be secured in the rear position, offering a lockable way to prevent the plunger from engaging, which is useful in situations where the plunger pin must be kept from protruding at times. On all types, the key can also be pulled out in the unlocked position to prevent unauthorized locking.

To prevent unauthorized disassembly or adjustment of the indexing plunger, the hex nut used for screwing the part in or out is only accessible while it is unlocked and the head has been pulled back. A lock nut is available as an optional accessory that can be ordered with the type designations AK or EK with the appended “K” signifying a lock nut.

In some cases, it may be useful to additionally secure the indexing plunger and the lock nut against manipulation by gluing or welding them.