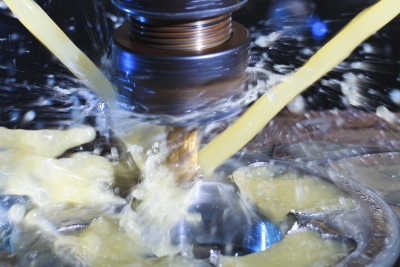 Chemtool Inc. announces Lubricut 4284, the newest in its line of high-performance metalworking fluids. Lubricut 4284 is a synthetic coolant, specially formulated for machining and grinding aluminum (and other ferrous and nonferrous alloys).

Its special composition provides lubricity and detergency that promote machine cleanliness (for less downtime spent cleaning) and high-quality finishes of machined parts. Lubricut 4284 has special corrosion inhibitors that deliver outstanding protection against staining, while remaining stable in both hard and soft water.

How is Lubricut 4284 different from other products? According to Mark Warnock, fluids technical manager: “Lubricut 4284 resists hard water buildup and has no emulsions in which bacteria can grow that normally affect the sump. Its unique composition maximizes heat transfer properties that remove heat from the tool—maximizing tool life, while remaining a cost-effective fluid.”

It is compatible with aluminum, bronze, copper, cast iron and steel, is safe for all metals, has a refract factor of 2.6 and is excellent for milling, turning, sawing, drilling, burnishing and OD/ID/centerless grinding applications—especially general aluminum alloys and aerospace aluminum alloys.