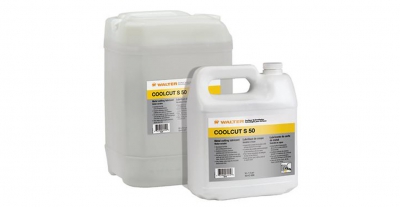 Walter Surface Technologiesoffers its new Coolcut S-50 soluble cutting fluid. The new fluid will improve the life of cutting tools and reduce heat buildup and friction on workpieces, even in tougher applications and on hard-to-machine metals, according to the company.

“Special EP additives in the liquid will provide extra lubricity in order to cut materials such as high tensile steel and stainless steel, and titanium, as well as other metals like aluminium and copper alloys,” says Olga Ivanysenko, associate product manager, environmental solutions, at Walter Surface Technologies. “The fluid forms a very stable emulsion and will increase feed, cutting speed and production, so manufacturing shops can perform more cuts, faster, all while ensuring better tool life and smooth operation, without having to change liquid.”

Relying on Coolcut S-50 will help heavy machining and manufacturing shops cut down on production time, which in turn helps them reduce costs and downtime. “They can do more, with less,” adds Ivanysenko. “In addition, the cutting fluid provides excellent corrosion protection, is safe to use and will not irritate the skin.”

Metal manufacturers can use Coolcut S-50 across the shop floor for a variety of applications, including drilling, milling, reaming, sawing and turning, and in higher-pressure machining processes.