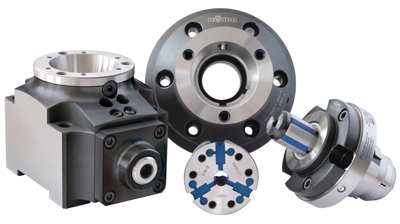 Röhm Products America has introduced the modular CAPTIS workpiece clamping system, which provides a range of workholding options for turning, milling and drilling applications through different combinations of modular components.

An innovative quick-change method permits conversion from external to internal clamping in less than a minute, and collet changes can be made in 15 seconds. It is compatible with the industry standard BZI collet interface. The CAPTIS system produces strong clamping forces without deformation of delicate workpieces while offering high repeatability and minimal runout.

Different configurations of the CAPTIS system deliver a variety of workholding functions:

• The power-operated, rotating CAPTIS collet chuck is designed for use in turning machines. Its compact size facilitates full use of a machine's work envelope.

• CAPTIS-D is equipped with axial tightening for machining bar stock and can be easily converted to the CAPTIS-A, which is ideal for flange-type workpieces and includes workpiece stop and hold-down features.

• CAPTIS-AF, with an axially fixed (dead-length) collet and optional workpiece stop, is reportedly ideally suited for delicate workpieces, short clamping surfaces and use in counter spindles.

• The stationary CAPTIS-MS collet chuck is intended for use in drilling, milling and machining centers and for manual machining. Operated manually with hydraulic power intensification, the chuck can be optionally equipped with a front or internal stop.