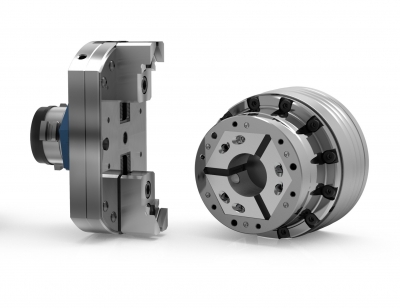 When you have a wide range of part diameters, configurations and small quantities, the dream setup would be to have maximum flexibility. Dreams turn to reality with the HAINBUCH’s modular system. Whether you’re working with round, prismatic, small or larger components, virtually any workholding configuration is possible with their modular system. The various workholding adapters can be installed in two minutes or less. HAINBUCH’s designers and engineers in Germany are constantly expanding its modular system to offer you the best workholding solutions. Something was missing though: an adaptation to clamp cubic parts. That's why HAINBUCH is pleased to introduce the 2-jaw module. Dreams do come true!

Modular system: flexible, more flexible, most flexible
Round workpieces are clamped from the outside with clamping heads (collets) within the collet chuck. Larger diameter workpieces, beyond the capacity of the collet chuck, can be clamped with the 3-jaw module. For cubic parts that are positioned centrically on machining centers and milling machines, the NEW 2-jaw module is now an option. You can change-over from clamping round parts to cubic ones in less than two minutes.

The 2-jaw module can handle turning applications up to 1,500 RPM. Due to its compact profile, it is the perfect alternative to large and heavy centric vises. The 2-jaw and 3-jaw module use the HAINBUCH collet chuck as their base. Change-over is possible without removing the collet chuck and realignment thanks to HAINBUCH’s Centrex quick-change interface.

Small, light and capable of multitasking
HAINBUCH’s modular solution, consisting of a chuck and jaw module, no longer compare to the large and heavy vises that are found in many shops and whose size is more of an obstacle than an advantage. As is often the case, the workholding is much larger than the part to be machined so interference is an issue. Special, longer tools are then needed and there’s a risk of a costly collision. The HAINBUCH modular system, on the other hand, is just as efficient and flexible as your multitasking machine tools are today.