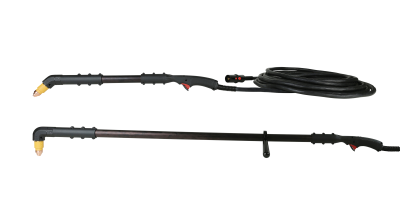 Like other SmartSYNC torches, these new torches automatically set the correct amperage, air pressure, and operating mode upon installation of the consumable cartridge and allow the operator to change the cartridge without returning to the power supply.  The torches also come with Hypertherm’s FastConnect™ feature to make switching between torches fast and easy.

Compared to the first-generation Duramax® Hyamp long torch, the new SmartSYNC long torches are lighter, requiring 45 percent less lifting force. In addition, the torches are even more robust and manufactured with a new flexible lead for improved ergonomics and maneuverability.

“Customers in a wide variety of industries have adopted the long torch since its introduction in 2014,” says Jeff Hluchyj, a Powermax product manager. “These customers tell us they can get a lot more work done, especially if they were using an oxyfuel torch before. They also like the torch’s ergonomic design and ability to stand up straight when cutting. Since operators do not need to bend over while using the long torch, they don’t get tired as easily and can cut for longer.”

Hypertherm long torches are used for a wide variety of jobs including cutting coupons at steel mills and risers and runners at foundries, decommissioning or demolishing ships and nuclear facilities, scrapping metal for recycling, and removing skeletons from cutting tables.