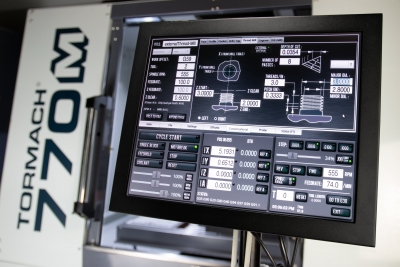 Tormach Inc. has introduced a software upgrade to its PathPilot CNC software package that offers premium functionality standard, at no cost. In addition, Tormach is introducing its new ‘TRY PathPilot’ program that allows new users to program, learn and train on the program for free.

“Cost and capability are two of the biggest barriers in a CNC investment,” said Lori Morrison Bufalo, marketing director at Tormach. “Tormach was built on the idea of minimizing those barriers. Our CNC machines provide premium performance at a significant price difference from our competition. We believe our latest PathPilot CNC control software, which comes standard with all our machine packages, is the easiest to master, yet feature-packed CNC control system available today.”

New updates to Tormach’s PathPilot CNC software include an enhanced trajectory planner for faster cycle times, and a new visual conversational programming feature for intuitive, step-by-step template to quickly write G code for milling and lathe sequences. In addition, memory has been expanded to 85GB of available program storage memory, complete WiFi connectivity is built-in, and users now have the ability to eliminate use of USB drives for programming with a new auto-sync function. This function allows users to post out of their CAM software to a Dropbox G-code folder, even when their CNC machine isn’t on. The next time the machine is turned on, the sync happens immediately.

In addition to the software updates mentioned above, Tormach is introducing its new ‘TRY PathPilot’ virtual CNC simulator. This cloud-based program, available for free to anyone with an Internet connection, allows new CNC users to learn programming in PathPilot’s environment and try it, before you buy it.

In addition, Tormach CNC machine owners can use this new software to program remotely from anywhere and upload their virtual PathPilot code to their local controller, and start making chips once they return to their Tormach CNC machine. Educators utilizing Tormach CNC machines in STEM programs will now have the ability for students to complete curriculum programming outside of the makerspace lab.