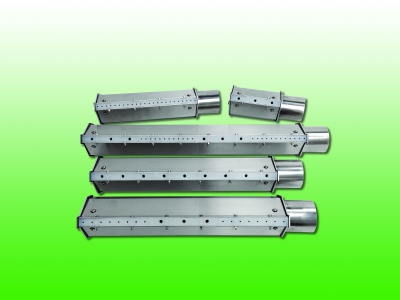 Maxum has announced the Nozzle Bar, a patented air blow-off device that looks and installs like an air knife but offers the full blow-off power of individual air nozzles, while using less energy and reaching further distances. Its internal nozzle system is fully customizable for optimal blow-off of any part, providing powerful force to reach deep cavities and varying part shapes and distances.

It's well known that air nozzles provide better blow-off force than slotted air knives. The problem has been that individual nozzles mounted to a manifold take up room, have fixed positions and flow rates, and can be very expensive. Maxum's Nozzle Bar solves those problems with its internal nozzle system customizable with a variety of flow rates and patterns, and its converging and laminar flow design to maximize velocity and blow-off distance.

By matching pattern convergence from the superior penetration of nozzles, the Nozzle Bar can be customized to provide powerful blow-off force to reach deep cavities and varying part shapes and distances. It can dry complicated shapes using more air where it is needed, and less air where it is not, all from a single nozzle bar. For complex parts inside washers, racked parts, unusual shaped containers, and many other applications this provides powerful blow-off that cannot be matched by any air knife design. A wide choice of stock patterns and flow rates are available.