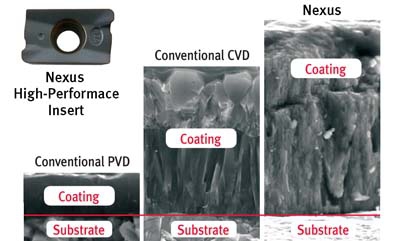 Nexus Cutting Tools, a new product line from Techniks, introduces its new line of Lamina cutting inserts. These high-performance inserts eliminate guesswork and reduce inventory. Only one grade is needed for machining most materials. Nexus inserts start with a sub-micron substrate and feature the thickest PVD coating in the industry (far stronger than standard CVD coating) to make the insert both tough and strong.

According to National Sales Manager Mike Raper, "Machinists can come to us for all their cutting needs from milling to boring and turning. Not only that, our customers are not limited by materials. They can reduce inventory and simplify manufacturing with a single insert grade designed to handle steel, stainless, cast iron, high temp alloys, and hardened materials. Add a grade made for aluminum and alloys and they've stocked a full arsenal of cutting options."