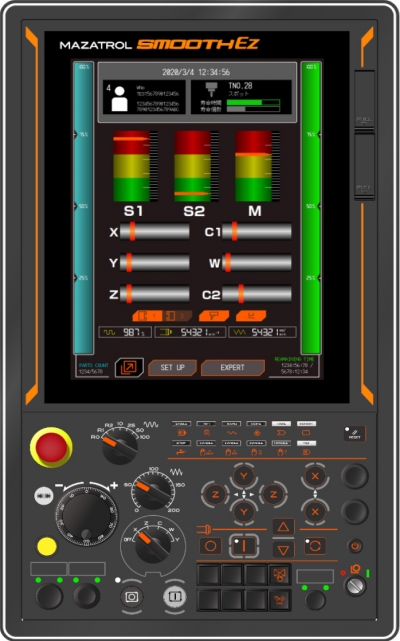 Mazak Corporation has announced the release of its latest machine control, the MAZATROL SmoothEz CNC. Designed as a control that blends both simplicity and advanced functionality into one platform, the new control debuts on Mazak’s new VC-Ez Series of vertical machining centers and QT-Ez Series of turning machines. The new Ez Series, including the new control, was developed specifically to help remove the cost barriers to acquiring the latest manufacturing technology – without sacrificing machine capability or production performance.

The most prominent feature of the MAZATROL SmoothEz CNC is its 15" capacitive touch-screen display, which accommodates a full-width on-screen keyboard or up to 60 lines of code. The NC system operates on two 800 MHz CPUs with an expanded 512 MB of DDR3-SDRAM memory. In addition to its redesigned LAUNCHER screen, the new control also has an expanded range of software features, including SMOOTH Machining Configuration, QUICK MAZATROL, and MAZATROL TWINS that were recently debuted on Mazak’s highly advanced MAZATROL SmoothAi CNC.

The user interface of the new control has been redesigned for unparalleled ease of use. New button designs and input modes, including the full-width keyboard, can be configured in a variety of ways to produce custom screens that match the layout with the operator’s ergonomic needs. Screen graphics can be enlarged or reduced as needed by the operator. Plus, the wholly redesigned LAUNCHER screen takes

advantage of the full 15" touch screen to simplify navigation with large buttons designed for the shop floor environment which provide one touch navigation to any desired screen on the control.

The MAZATROL SmoothEz CNC also offers expanded functionality with options previously available only on the MAZATROL SmoothAi control. This includes QUICK MAZATROL, which displays a 3D model of a part as it’s being created in real time to help users edit and confirm their programs, as well as full compatibility with MAZATROL TWINS and SMOOTH CAM Ai. Using these tools’ Solid MAZATROL programming, Virtual Machining and Cutting Adviser functions significantly reduce setup time through efficient program creation and simulation.

Further contributing to the new control’s ability to help shops improve program management is its compatibility with SMOOTH Project Manager. This software, which can be operated using commercial PCs in the front office and tablets at the machine, allows shops to easily manage CAD/CAM programs by bundling together programs, parameters, tool data and work offsets. The resulting project data can then be loaded on machines as a single package to reduce the time spent inputting data during machine setup.