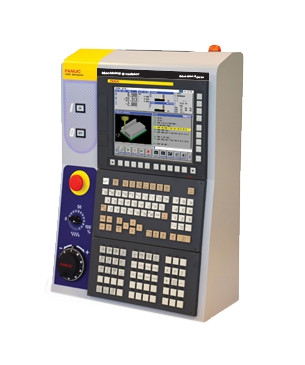 The FANUC Machining Simulator comes with Fusion 360, a cloud-based 3D CAD, CAM and CAE software platform that helps bridge the gap between design and machining and works on both Mac and PC. Students can use Fusion 360 to perform CAD/CAM work and the included post processors will convert the designs into G-code suitable for the included CNC. The CNC will use this G code to command the machine tool. The simulation system also includes a simple G-code editor for making modifications before the program is sent to the CNC. Students can easily import their programs directly to the CNC using the FANUC FASBacCNC user interface and also back-up the critical CNC data.

The core of the system is the flexible and powerful FANUC CNC Simulator. This portable CNC Simulator provides users with the experience of working with real look and feel of a true hardware-based FANUC control. Based on the industry standard FANUC Series 0i-Model F, the CNC Simulator can be operated as either a 3-axis mill or a 2-axis lathe. Users can run programs, manage tooling and make any modifications on the control just like they would in a manufacturing environment. The FANUC CNC Simulator includes FANUC Manual Guide i conversational programming software for users who would like to learn shop floor programming. An integrated PC is embedded in the FANUC CNC Simulator to run the Fusion 360 and ModuleWorks simulation software.

The machining simulation component was developed in partnership with ModuleWorks, a leading supplier of CAD/CAM components for toolpath generation and simulation. Users can virtually manufacture parts in milling or turning environments with realistic kinematics and structure. The simulation is based on actual CNC position data, not on the G-code program, this provides the most realistic simulation as the virtual machine reacts exactly as a real machine. Manual machine functions like jog, hand-wheel and reference cycles also work exactly like a real machine. The software also uses color-coded tool paths, back-plot and cut locations to make it easy for users to identify the tool, path and cutting result. Real-time collision detection uses visual and audio signals to notify users of collisions. The milling simulation includes a 21-tool changer and the turning simulation includes a 12-tool turret. Milling tool data can be freely assigned or imported from the CNC Simulator, while turning uses a predefined set of turning tools that cover a wide range of applications.

Fusion 360 is free for students, startups, educators and hobbyists once they create an Autodesk account. Commercial users can sign up for a free 1-year subscription through a special promotion with FANUC.