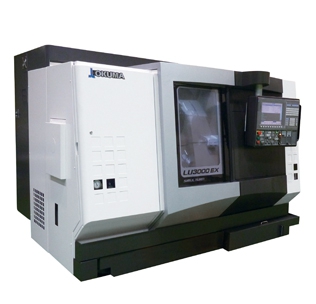 Okuma says its new LU3000 EX-M turning center is known for excellence in manufacturing precision parts in high production environments and is designed for reliability, longevity and maximized up-time. The LU3000 EX-M is built as an integrated production system with one goal in mind: to provide the customer with a machine that makes precision parts with the highest level of efficiency for years of trouble free production. This machine features a compact design, heavy duty, cast iron base, in addition to optimized CNC, motors and drive systems that are specifically designed to work together for maximum machine performance.

With a powerful main spindle and dual-servo turrets capable of simultaneous, synchronized control, the LU3000 EX-M has the power and flexibility to produce parts with the highest level of efficiency - two tools in the cut maximize production. Additionally, Okuma offers a series of functions specifically designed to enhance and simplify simultaneous 4-axis turning, including a single programming file for both turrets, and the ability to program both turrets as if they were the upper turret operating on the left spindle.