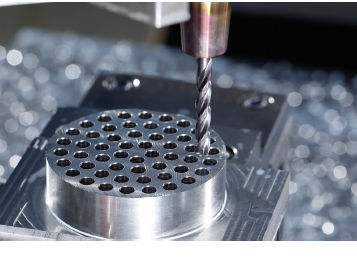 The idea of designing drills for higher feed rates by adding a third cutting edge is nothing new. However, due to the challenging chip evacuation, these tools have so far only been suitable for a few applications, such as machining cast iron. With a new design, the Hoffmann Group has now succeeded in harnessing the advantages of the three-flute drill for long-chipping steels and stainless steel materials, according to Steffen Hedrich, director drilling at the Hoffmann Group.

Three-flute solid-carbide drills have already been around for some time. The first tools of this kind came onto the market around 50 years ago. They are now used as part of a reliable process in the machining of cast iron. The advantage is that they have a higher feed rate due to the third cutting edge. However, as yet three-flute drills have been ill-suited for long-chipping materials because they could not evacuate the metal-removal rate increased by the third cutting edge due to the design with smaller flutes. Because of the inadequate flow of chips, the risk of a chip jam is increased and there is a risk of tool breakage. As a result, three-flute drills have not been widely used until now and over the decades the idea has been put to bed so to speak.

Last year, the Hoffmann Group introduced the new three-flute Garant MasterSteel Feed solid-carbide drill for the first time. The drill produces a 50 percent higher feed rate per revolution, even in long-chipping steels and stainless steel materials, and it also offers extraordinary durability. To achieve this, the shape of the point geometry, the capacity for precise chip breakage and chip evacuation have been optimised in particular. The design of the point geometry is crucial when it comes to evacuating the chips away from the working zone quickly and reliably. The Hoffmann Group has achieved this goal with a new, patent-pending point geometry. As a result, the chips are sufficiently compressed in the area of the point geometry and are even broken when processing ductile materials.

To evacuate the chips discharged by the three cutting edges as part of a reliable process, particularly large chip flutes are required. The Garant MasterSteel Feed drill has therefore undergone core tapering. This enables larger chip flutes towards the end of the twist section, combined with sufficient stability of the core. The importance of the twist section design was also demonstrated by the structure of the longer 8xD and 12xD drills. The development of these tools took a particularly long time. As part of this, the spiral angle had to be optimised multiple times and was modified until the necessary process reliability was achieved. The new three-flute drills with the world's largest L/D ratio therefore came onto the market a year after the market launch of the first Garant MasterSteel Feed solid-carbide drill. The chip evacuation is now so efficient that it functions as part of a reliable process in various materials. It was possible to demonstrate this in internal tests with materials such as St37, C45, 42CrMo4, X155CrVMo12.1, X5CrNi18-10.

As well as reliable chip evacuation, the force and torque characteristics of three-flute drills must also be taken into account because there are higher feed forces due to the design. The test series have shown that with the same cutting data, different feed forces occur depending on whether it is a two or three-flute drill design. Depending on the tool, the difference was between 46% and 59%. This was mainly due to three cutting edges being engaged in the material at the same time rather than two.

If the two effects described above are now added to the feed force, the following conclusions can be drawn with regard to the field of application for three-flute drills: The workpieces and clamping should be stable; for tools with a diameter larger than 12 mm, the machine spindles should be able to provide high torques at low and medium speeds.

Due to the third main cutting edge, three-flute drills also offer significant advantages when spot drilling. The three main cutting edges run in curves to the centre of the tool and form a tetrahedrally shaped chisel point where they meet. However, in the case of the two-flute drill, the main cutting edges end in a chisel point that connects both the main cutting edges in a line. The difference can be seen in the spot drilling behaviour. In the case of the classic two-flute drill, the chisel point meets the material at several contact points at the same time; there is no clear fixed point. As a result, the tool may start to wobble. This happens in particular when spot drilling uneven surfaces. The three-flute drill, however, has a punctiform chisel point. The first contact between the material and the tool therefore takes place at a precisely defined position. Once the tool has penetrated the material, the process forces act on the "edges" of the chisel point and also promote the self-centring capacity of the drill. It is therefore possible to prevent the tool from drifting, even on uneven surfaces. These features make the three-flute concept perfectly suited for the design of NC spotting drills. It is advisable to prepare the drilling position precisely for the following tool by spot drilling, particularly if deep holes need to be drilled with tools measuring 8xD or even 12xD. The Hoffmann Group has therefore developed a three-flute NC spotting drill and, with a calculated point angle of 155 degrees, has optimally matched it to the subsequent Garant MasterSteel Feed drill.

Constructive improvements have made it possible to harness the high feed potential of the three-flute drill for more materials and even for long-chipping materials such as X5CrNi18-10 and for general structural steels such as St37. Changes in the area of the point geometry and the spiral angle, convex cutting edge shapes and a tetrahedrally shaped chisel point were the factors for success.