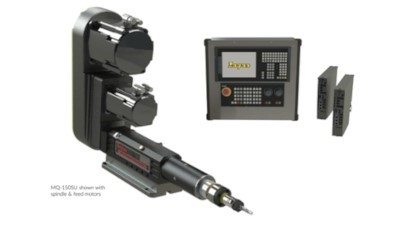 Zagar Inc., bundles its MQ150SU with a dual axis CNC control package for a broad range of ferrous and non-ferrous drilling and tapping. The combination is intended as a good first choice for a variety of applications, as well as for optimizing current operations and can be integrated into more robust drill and tap applications.

The MQ150SU is a sealed unit version of the company’s popular MQ150, featuring an internal synthetic lubrication system and grease packed bearings for long life and operation in any position. The feed unit uses a ball screw on the center line of a hardened, precision, 55mm diameter quill. It is precision ground, pre-loaded with zero backlash. An involute spline driven spindle uses EP7 high precision bearings and the unit features an HSK-32C Spindle nose supplied connection with clamping cartridge assembly.

The combination is well-suited for numerous drilling and tapping applications in stainless steel, CRS and aluminum, with maximum spindle speeds of 5,000 RPM.