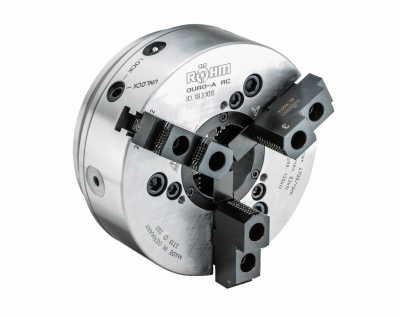 The integrated spindle motors in today’s turning centers have dispensed with the belt-driven motors of old in favor of motors that can instantly produce the torque needed to ramp up from zero to full acceleration. The latest lathes from top OEMs can reach thousands of rotations per minute in less than a second and rapid traverse acceleration is increasingly reaching and surpassing 1 G, all of which exerts enormous forces on a machine’s chuck. And, with an old, often heavier chuck on the end of the spindle, shops have great difficulty reaching those top speeds.

At the same time, modern cutting tools enable far greater speeds, feeds and surface footage for material removal rates several times greater than the simple tools of old. And to take full advantage of these tools, cutting tool OEMs recommend new cutting strategies that require exceptional clamping force on the part of the machine chuck. The latest turning tools can even be used “backwards,” creating cutting forces that want to pull a workpiece away from the chuck instead of toward it. This cycle-time-reducing machining strategy places even more emphasis on a turning machine chuck’s level of strength and holding power to ensure both safety and accuracy.

Of course, the clamping strength of a given chuck isn’t the only critical factor. Setup time has become central to production optimization with today’s high-mix/low-volume production environments. When a shop has to handle dozens of jobs per day instead of focusing on mass production for a few jobs, every second between machining cycles counts.

Likewise, just-in-time (JIT) manufacturing has made “excess inventory” a dirty word, which complicates turning operations for shops that need to perform multiple setups per day for shorter-run jobs. Even if you have the best setup operator in the industry, it still may take him or her over 15 minutes to adjust the jaws with serrations and t-nuts.

Quick-change jaw technology, which has been around for decades, solves many of these time-consuming set-up problems. But OEMs from across the broad manufacturing industry have been slow to respond to the additional need for equally advanced chucks for their advanced machines, tools and cutting strategies. However, one workholding OEM realized that yesterday’s chucks were in dire need of redesign and developed a new chuck with all the features that shops need to get the most out of their powerful new turning machines.

RÖHM GmbH introduced this new solution, the DURO-A RC, at AMB 2018 in Stuttgart, Germany. Featuring quick-change capabilities that enable adjusting, reversing or swapping out its jaws in just 50 seconds, the new power chuck has a billet steel body with a compact profile that reduces its overall height by 14 percent compared to similar chucks. The result of this optimized design is a weight reduction of 17 percent and a significant increase in the size of the overall work envelope. Outside diameter part size capacities range from 180 mm to 400 mm with chuck heights measuring only 83.9 mm to 125.8 mm. To accommodate greater spindle through-hole sizes in today’s machines, the size of the chuck’s through-hole has been expanded and ranges from 53 mm up to 128 mm in diameter.

The low jaw weight, paired with an improved key bar design, enables the power chuck’s extremely high clamping force – up to 240 effective kN for the largest chucks – even with high rotational speeds. The DURO-A RC keeps a tight hold on parts even when today’s powerful turning machines create strong centrifugal forces that can pull weaker jaws apart. Instead, the 180 mm-size chucks are rated for a maximum speed of 6,300 rpm, with equally impressive maximum rotational speeds across the range.

In addition to withstanding high rotational forces, RÖHM engineered this latest line of power chucks specifically for turning machines with rapid acceleration speeds. Not only will a heavy chuck slow these machines down significantly, but between the high accelerations and the rotational power outputted by modern spindles, the acceleration acts like throwing a grenade at a chuck. Given that high-speed machining can result in equally high-speed workpieces being thrown by weak chucks, the DURO-A RC’s reliability helps to keep operators safe.

The power chuck’s quick-change jaws have been configured to offer a generous jaw travel ranging from 6.8 mm to 9.4 mm. This long-stroke chuck set up makes it far easier to accommodate automated applications using robots, which can struggle with placing parts in a narrow clamping space. It’s also essential to the DURO-A RC’s greater flexibility with respect to part sizes.

For even more process versatility, as well as inventory reduction, RÖHM developed the DURO-A RC as a modular system with an interchangeable backplate. In previous decades, shops would need a different part number for every type of mount, even for the same-size chucks. One might have a 260-size chuck with a 170 flat nose, another with a 220 flat nose, another with an A28 spindle mount and a fourth with an A26 mount. Now, shops can have a single chuck of a given size and simply buy new backplates when they need to place the DURO-A RC in a new machine.

With chucks like these, many shops have increasingly moved toward “kitting” their jobs, or creating sets of tooling, tool-holders and machinable soft jaws that can be stored until the next time they’re necessary for a job. As high-mix/low-volume production continues to be the dominant strategy for job shops and major manufacturers alike, setup time reduction can be easily achieved when it’s possible to dust off an old job by simply opening a prepackaged kit and installing the clamping system in seconds.