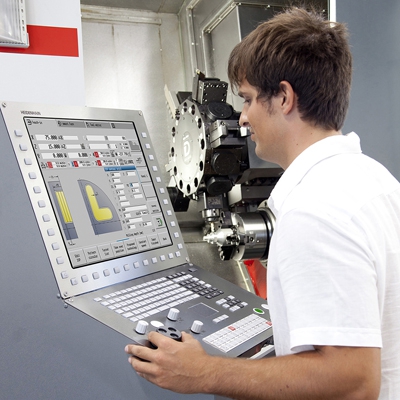 HEIDENHAIN's top-of-the-line lathe control, the CNC PILOT 640, offers enhanced functions and new hardware. These features include the inclusion of smart.TURN, a dialogue guidance system that helps the operator structure the program and define technology data, machining strategy and global data settings in an easy mode. Further, the CNC PILOT 640 has options for full-surface machining with C or Y axis and dual-spindle operation. Fast data transfer and communication with outside devices are also possible with this lathe control.

New end-user features include the complete support of the opposing spindle during automatic work-plan generation in the TURN PLUS mode, better definition of the cut-off point and pick-up devices and an enhanced fixture dialog. Also, the ICP editor allows the parameterization of holes and threads by the user when including contour elements.

The machine builder will reportedly welcome HEDEINHAINs new generation of main computers with more powerful processors and performance reserve for future expansions. The CNC Pilot 640 now has software that is perfectly suited for its hardware innovations. Furthermore, the memory card comes with a faster S-ATA protocol ("CFast") for short access times during startup. Finally, more languages are included in OEM cycles and the machine builder can define work-space limits in the inclined workplane.

In the DIN PLUS mode, cycles can be assigned to contour sections and functions can control special machine components. DXF- and other externally created files can be imported and tested in graphic simulations. A 19-inch TFT color flat-panel display adds to the user friendliness and the all digital design of HEIDENHAIN controls ensures easy diagnostics and noise-free operation.

Another benefit of the CNC PILOT 640 is that it has an add-on for multiple drilling and milling processes on the end face and lateral surface which is usable in one machine setup. As an option, the lathe control has a teach-in mode for simple, non-recurring tasks, rework or thread repair. For example, the CNC PILOT remembers the position and spindle angle when re-cutting a thread. It also automatically calculates the number of cuts for roughing and recessing. All this is complemented by a comprehensive tool and technology database that takes account of tool wear, turret assignment and all other parameters that define tools and workpieces.

Lastly, high contour accuracy is guaranteed by the versatile CNC PILOT 640, as it can dynamically calculate the contour in advance.