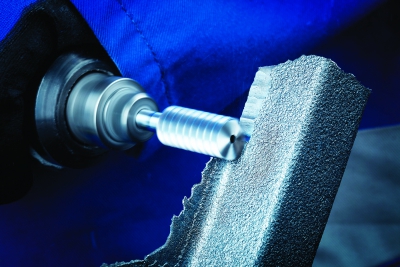 Cast Cut achieves stock removal rates up to 100 percent higher than conventional double-cut burs, thanks to its innovative tooth geometry—a major plus for automotive customers given the industry’s relentless drive to boost productivity and save time. Other key market applications include foundry, welding and general industry.

Optimized for coarse stock removal on all types of black, grey and white cast iron, the Cast Cut bur line is said to achieve cutting speeds in the 1,500-sfpm to 2,500-sfpm range, which is said to enable an aggressive cutting action that results in large chips and good chip removal.

In keeping with PFERD’s commitment to creating overall value for the customer, the new Cast Cut bur is energy efficient and reduces waste. It is available in five standard SCTI shapes with a shank diameter of ¼".