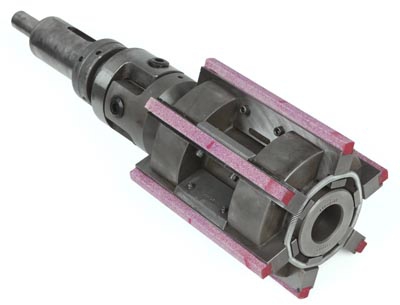 Sunnen Products Co. is introducing a 60-grit premium red aluminum-oxide honing abrasive that reportedly cuts material 25 to 50 percent faster than other conventional stones, depending on the workpiece material. The new abrasive formulation resists chip loading and galling even in stainless steel. It is available for all current Sunnen General Hone tools, as well as those of other manufacturers.

The 60-grit abrasive is specifically formulated for machining oil/gas industry parts where fast, base-metal removal is critical to enlarging a bore in a short cycle time. According to Sunnen, the 60-grit aluminum oxide abrasive is an ideal alternative for shops where inexperienced machine operators might damage a set of faster-cutting, but higher cost superabrasives, or where inferior honing oils may be in use.

"This is a good compromise for shops that want fast metal removal without the risk of wrecking superabrasive stones, which are really the optimal solution," says Dennis Westhoff, Sunnen Business Development Manager. "We developed this product for those shops that prefer to trade a somewhat longer cycle time and shorter stone life for much lower initial cost and risk."