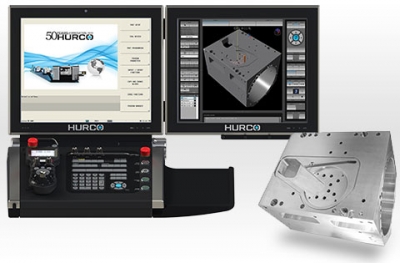 The Hurco MAX5 control is now even more powerful with the new 3D Import feature that includes 3D DXF technology. This control feature allows the user to simply load the file they receive from their customer directly into the Hurco control. “3D Import eliminates extra steps and is a huge time saver,” said Mike Cope, product technical specialist for Hurco.

Cope explained the evolution of the 3D Import, which illustrates Hurco’s commitment to continuous innovation of conversational programming, which was invented by Hurco in 1976. “When Hurco introduced the DXF Transfer option in 1992, it was a real game changer for the end user because many shops received DWG or DXF drawing files. This made it very easy to transfer the files to the machine and use them to create their programs on the shop floor (right at their Hurco CNC Machine), and also eliminated incorrect data being entered, or ‘fat-fingering numbers’ as we say in the shop. Today, it is common for shops to receive solid models of the parts that they need to produce, and even paper prints are becoming obsolete. Therefore, Hurco engineers developed 3D Import, which includes 3D DXF technology that displays all geometry that the CAD system outputs, including splines. With 3D DXF, the customer can select the bottom of a contour, and the Z-axis depths will also be automatically input into the conversational block.”

All previous versions of DXF translators only displayed lines and arcs data, and were only useful in 2D since no Z-axis data was translated. 3D Import (the solid model portion) automatically creates the necessary Transform Plane data blocks in conversational programming for 5-sided programs. “As a proponent of 5-sided machining, the automatic creation of Transform Planes is where this control feature really shines,” said Cope, who is the author of the book, "The Power of FIVE: The Definitive Guide to 5-Axis Machining."

Additionally, the integrated Hurco control powered by WinMax is being equipped with more memory and processing power out of the box: 2.7GHz dual core processor, 4GB RAM memory, a 128GB solid state hard drive, 10,000-block lookahead and an intuitive graphical user interface that supports multiple machining strategies. As the inventor of Conversational Programming, Hurco conversational programming is considered the gold standard in the industry, but the control has many high-end features for NC Programming, too. “The Hurco control is considered the most flexible control in the industry. I think we might be the only company to have a feature called NC/Conversational Merge that provides users with a blend of both programming methods, which is very popular with machinists, especially those that don’t initially think conversational programming will benefit them,”  said Cope.

In addition to the integrated MAX5 control, Hurco’s expansive line of CNC machining centers are equipped with the sophisticated motion control system Hurco invented that determines the optimal trajectory to run the tool, provides consistent programmed feed rates, and reduces cycle time. With this patented motion control system called UltiMotion, cornering velocity is 2.5 times faster than conventional motion, machine jerk is reduced by half; and because the software is smart enough to adapt as required by the toolpath, dynamic variable lookahead can be up to 10,000 blocks. UltiMotion is different than the smoothing features offered by CAD/CAM software and improves upon CAM output by providing better handling of the machine mechanics and dynamics. All Hurco CNC machining centers are equipped with UltiMotion as a standard feature, not an extra charge. Additionally, no set up or programming is required.