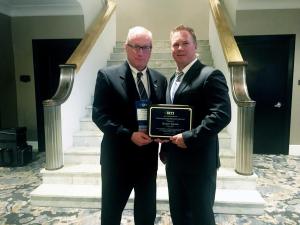 Souderton, Pa.-based Solar Atmospheres President Jamie Jones was presented with the Metal Treating Institute Distinguished Service Award for 2017 and nominated as vice president/president-elect of MTI for 2017-2018. He has served on the institute’s board of governors since 2013. He has served on a variety of committees, including the education committee and nextgen creative team. The award was given for outstanding, significant and well-recognized contributions of lasting importance to MTI. Solar Atmospheres has been a member of MTI since 1983.

He said he was “very happy to serve the MTI in this capacity. I look forward to the challenges ahead and embrace the opportunity to build MTI to be an even more all-encompassing organization for commercial and contract heat treaters around the globe.”