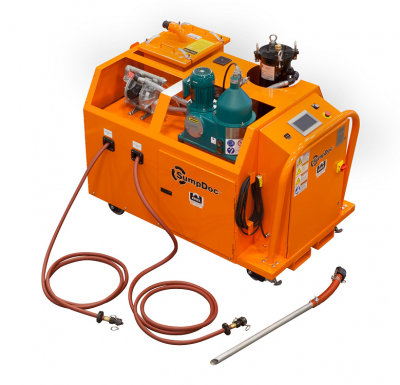 The Eriez HydroFlow redesigned SumpDoc portable inline fluid reclamation machine is winning new orders and generating an overwhelmingly positive response from users, according to the company. The modified design, which was developed based on customer input and unveiled in 2017, makes SumpDoc units more affordable and easier to use in a smaller footprint.

SumpDoc combines both sump cleaning and tramp oil removal in one package. This product line serves as a cost-effective alternative to a central fluid recycling system or batch processing. It supplies complete coolant restoration and rejuvenation treatment of the metalworking fluids in the machine tool sump, with minimal operator interface. There is no interruption in the production cycle or need to transport fluids. The portable SumpDoc can be wheeled next to a machine tool, parts washer or rinse tank to provide full-service fluid reclamation in a simple two-step process.

The updated SumpDoc is simple to operate, compact and lightweight. The small footprint allows an operator to easily maneuver the unit around the plant and access previously hard to reach sumps without difficulty. HydroFlow Product Manager Ron Wendt says, “Initial feedback from users proves that the new SumpDoc has really hit the mark.”

The SumpDoc also features an improved user interface, which makes it possible for plant staff to quickly put the machine into operation and begin realizing the operational and financial benefits of maintaining clean coolant. Wendt explains, “Eriez provides a SumpDoc evaluation form and economic justification model to allow prospective buyers to assess if the unit is the right match for their facility. The straightforward form enables them to crunch the numbers using their own data to determine return on investment.” Wendt says economic advantages stem from the elimination of downtime and real savings from re-use of fluids.

The main components of the SumpDoc include: sump cleaner for removal of chips and solids 50-micron and larger, pleated bag filter and housing for removal of solids down to 10-micron, high speed centrifuge for removal of emulsified tramp oil and fines down to three to five micron, an ozone generator for microbiological treatment of coolants and electrical controls with touch screen dashboard.