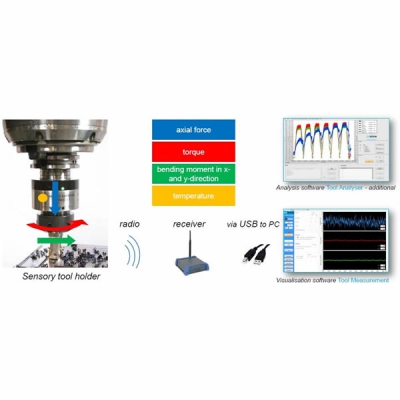 The Spike sensory toolholder is a wireless force sensor used for tool monitoring. During the machining process (e.g drilling or milling), it can measure the generated force and torque directly at the toolholder. The occuring data will be transmitted wirelessly to the receiver and the tool measurement software.

Data can be saved and compared later with the tool analyser software. The transmitted data offer the user the possibilities to solve problems faster, to increase tool life time and productivity. It enables end users to do process diagnosis and to optimize cutting and milling processes.

The Spike sensory toolholder can be mounted on nearly each toolholder. Even if the holder you need does not corresponded with the diameters above we may be able to construct it. In this case our engineer will build up the holder you need with a Spike system on the computer to ascertain if the construction is possible.

Once the user received the Spike it takes only a few minutes to replace a standard toolholder with a Spike sensory toolholder. That is caused by the wireless "plug and play" pricipal the device works. There is no additional effort for the machining engineer.

The complete Spike system packs up conveniently in its mobile case allowing for it to be easily moved from machine to machine.