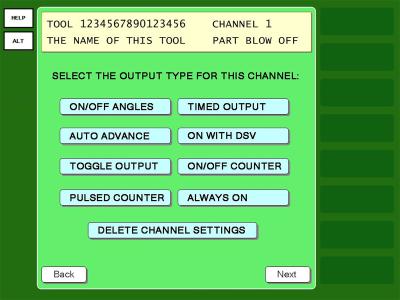 A new Toggle Cam Output performs an asymmetrical toggle function, turning an output off or on for different stroke amounts. The output can be used to operate diverter gates and to control complex gagging operations. The new On/Off Counter Cam Output precisely controls functions that need to operate at a preset interval instead of on every machine cycle. Operating similarly, a new Pulsed Counter Cam Output is programmed with an “on angle” and a dwell time instead of an on-off output.

Useful when running configurable tooling, a new Channel Always On Cam Output will simply turn on and stay on until a new tool is loaded. ProCamPAC PRO PLS also features a unique Triggered Cam Output which actuates a precision one-time cam timing signal based on a preset trigger such as an external input from ancillary equipment, an extended period of machine idle time, or a job change. This output type is ideal for diverting parts during a warm-up period, QC checks or when bad parts are determined by an outside measuring system.