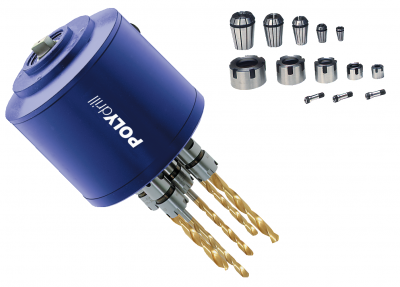 Who doesn’t know the old saw "Time is money?" Using POLYdrill multiple-spindle heads from SUHNER, many have taken advantage of this wisdom and made money the old fashioned way for 30 years and counting.

In its catalog in 1982, SUHNER introduced a new line of multiple spindle heads, which combined modern design features with high drilling  performance in a fairly compact package.

Since then, SUHNER has built thousands of multiple spindle heads with gains in know-how invested in improved technology. This basic philosophy continues.

Significant gains in productivity and output are achieved through the application of standard and simultaneous multi-operation components at a relatively low investment cost.

Custom-made, application-specific, fixed-spacing heads with up to 144 spindels are an enormous increase in productivity.

In addition to multiple spindle heads, SUHNER has a variety of other POLYdrill components including angle heads
for drilling, tapping and milling operations as well as back facing heads for drilling and countersinking operations.