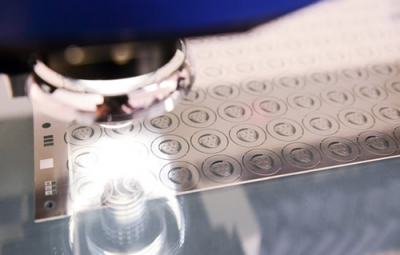 The overarching objective of car manufacturers the world over is make increasingly clean and increasingly fuel-efficient vehicles. As such, the demand for gasoline direct injection (GDi) systems is growing, as GDi systems dramatically reduce CO2 emissions.

The growth in the GDi market is staggering. In 2008 it was estimated that about 2% of cars built incorporated this technology, but recent predictions suggest that by 2020, 25% will include GDi systems as standard. This is great news for Precision Micro, the photo-etching specialist, which supplies photo-etched flexures used in GDis systems and this is stimulating major growth in the company.

Precision Micro has been making major inroads into the automotive market in recent years with its photo-etched flexures. It supplies flat springs to three of the five key global GDi manufacturers, and has made a 5-year agreement with Continental to supply it with flexures. It is producing more than a million GDi flexures each month, and sends them all over the world, including China, South America and the United States.

With the forecast expansion in the GDi market, Precision Micro predicts revenue growth from its GDi customers to increase by 25% in 2017 and by 50% in 2018.

Precision Micro is now well-established in the automotive market, thanks not just to the supply of flat springs for GDi systems, but also for the manufacture of intricate speaker grilles for high-end cars and interior trim. Precision Micro is planning for expansion of its premises to accommodate the increased demand.

Turnover has soared, and projections suggest that the company will reach £20 million in 2020. Headcount is also increasing, and there is an aggressive and sustained plan for investment in photo-etching technologies. As such, the company is unique in its ability to cater for dramatic increases in demand such as that in the area of GDi flexures.

Mick Taylor, commercial director at Precision Micro says, “Etching is by far the best method for producing flexures. It is particularly suited to working with high performance spring steels, and the burr- and stress-free nature of the process means that springs actuate longer and more reliably which is vital in safety critical and exacting environments such as in GDi systems.”