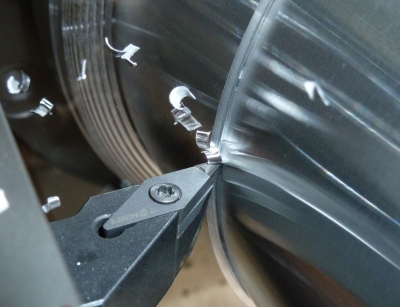 LACH DIAMOND can look back on 20 years of experience in the development of PCD chipbreakers. The first CO-type patent was issued on January 26, 1999: A laser cut chip groove for PCD materials.

Practice has shown, however, that chipbreakers with a so manufactured chip groove have proven to be only suitable to a limited extent for a process-reliable, controlled chipbreaking process of long chipping aluminum alloys.

An active chipbreaker was the final solution. It had to show outstanding performance during rough machining, as well as fine finishing. LACH DIAMOND's PCD »3D-active« chipbreaker was born.

While CO-type chipbreakers only redirect the chips, the new »3D-active« chip breaker will already guide chips with a cutting depth (ap) of 0.01 mm. The cutting depth can be increased up to the maximum length of the cutting edge.

Shown is a PCD cutting insert with active chipbreaker »3D-active« turning aluminum with a cutting depth (ap) of 2.0 mm.