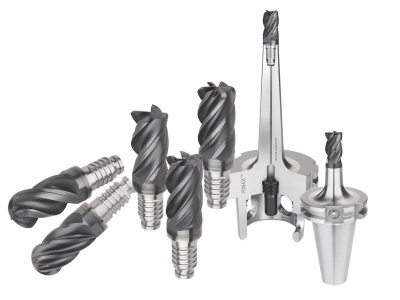 Back in 2014, Kennametal announced a technology partnership with Haimer for the development of a modular cutting tooling system. Since that time, the company has been busy developing, testing, and building inventory of DUO-LOCK, which promised even then to be “the most rigid and most precise interface in the marketplace.”
Today it’s even better. According to Thilo Mueller, manager of solid carbide end milling at Kennametal, DUO-LOCK is the only modular endmill solution able to compete at solid carbide levels, and outperforms its nearest modular competitor by more than two to one.

That means full-width slotting at depths up to 1 x cutter diameter, and side milling up to 50 percent radial engagement at 1.5 x the diameter deep, even in stainless steel, titanium, and other high-temp aerospace alloys.
Mueller says he’s excited about the tool’s robust machining qualities, but is equally enthusiastic about its broad initial product offering.

“We have over 400 line items coming in the first wave, with many more coming early next year,” he says. “These include the most popular size end mills in both inch and metric, as well as a broad array of adapters, integral shank holders, and extensions.”

Many of those extensions are equipped with HAIMER’s Safe-Lock technology, a secure clamping mechanism that eliminates concerns over tool pullout and creep in high-performance milling applications. HSK, CAT, BT, and comparable spindle tapers are also available.

One of the things that makes DUO-LOCK unique is its intelligent thread design. Using FEA-based design tools, Kennametal has optimized the connection to eliminate any possibility of tool failure even at elevated loads. The result, says Mueller, is that DUO-LOCK handles 25 percent more torque than its closest competitor, permitting higher feed rates and axial depths of cut, especially in long reach conditions.

The cutting geometry is likewise unique, and uses an upgraded HARVI front end with an asymmetrical flute design. This breaks up cutting harmonics, reduces chatter, and provides 20 percent or greater chip load per tooth compared to the solid carbide versions.

The HARVI II 5 flute cutters also received an upgrade: a variable helix known for its full slotting capabilities in titanium. The eccentric relief behind the cutting edge with HARVI III is also a proven performer in titanium and other heat resistant alloys, and is sure to satisfy the needs of customers looking for larger modular versions as well. Multiple carbide grades are also available, including Kennametal’s proprietary Beyond grades KCSM15 and KCPM15, making DUO-LOCK a go-to solution for everything from heavy roughing to semifinishing. “Because of the very small amount of tool runout, some of our customers are even seeing success in fine finishing applications,” says Mueller.

Assembly is easy: clean the DUO-LOCK insert and coupling, thread it by hand onto the adapter (use gloves, the edges are sharp!), and torque it down. That’s it. Since DUO-LOCK operates at far higher cutting parameters than its competition, the torque values are likewise much greater, an indicator to customers familiar with such tooling that
DUO-LOCK is a different species within the modular machining world. DUO-LOCK’s double-cone locating surface provides Z-axis coupling repeatability of 10 μm (.0004 in.) or better, and tool to tool repeatability in the 50μm (.002 in.) range, eliminating the need for offline presetting or tool touch-off in the machine. And the additional contact surface at the base of the tool assures radial runout at the coupling below 5 μm (.0002 in.), improving run
out at the cutting edge tremendously, similar to the 2nd contact area enjoyed by KM or KM4X customers.

And when the cutter’s dull, simply load it into a Kennametal Blue Box and ship it to one of the company’s reconditioning facilities around the world. The result is a rigid, highly accurate tooling solution that offers greatly reduced setup time and simplified tool changeover, cutting performance equal to solid carbide, and the stiffness to remove more metal in less time than competing modular systems.