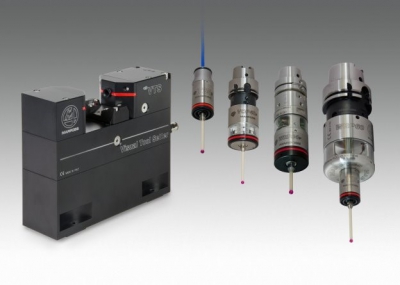 Marposs offers its high-accuracy Mida Diamond touch probes, which feature piezo-electric technology and are designed for 5-axis machining centers and milling machines. These probes, available in optical or radio transmission styles, provide enhanced measurement performance on 3D surfaces with repeatability within 0.25 µm and are well-suited to industries where precision requirements are pushed to the limits daily, such as die and mold, aerospace, aeronautics and biomedical.

Through automatic detection of machine axes position, these probes achieve part positioning, workpiece orientation and origin identification, as well as accurate part measurement. Relying upon a special filter, these probes can distinguish false-triggering events from actual touch events to provide better performance than other high precision probes, which might be sensitive to noise and vibrations, according to the company.

There are several types of applications are available. Operating with either a radio or optical receiver, the probes offer a wide operating field useful for large machines where line-of-sight between probe and receiver is not ensured. And, because the line of sight between the touch probe transmitter and receiver is not required, complex surfaces and deep cavity parts can be inspected. Measurements may be performed at depths as great as 1 m because of the modular structure and extensions of the probe.