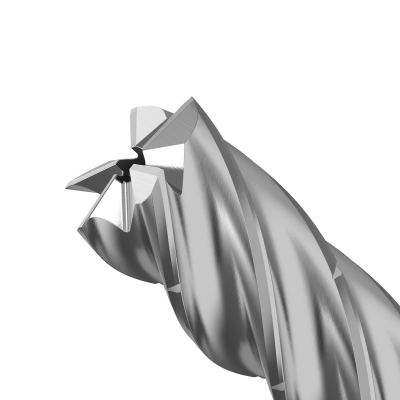 Kennametal announced its latest innovation in high-velocity aluminum roughing, the KOR 5 solid-carbide endmill. With this 5-flute endmill table feed rates increase up to 66% compared to commonly used 3-flute tools—redefining productivity for aircraft manufacturers and their suppliers.

KOR 5 is aimed at removing large amounts of metal and getting it away from the work zone as quickly as possible:

The tool has the potential to become the new standard for machines utilizing CAD/CAM toolpaths.

KOR 5 has more active contact points versus a 2-flute or 3-flute endmill because it is a 5-flute endmill, which creates improved stability and eliminates chatter on even the heaviest cuts.

Applying the tool with low radial engagement, but high depth of cut results in much higher metal-removal rates than traditional methods.

And to assure predictable, no pull-out performance at maximum feed rates, the KOR 5 is available with Safe-Lock shanks.