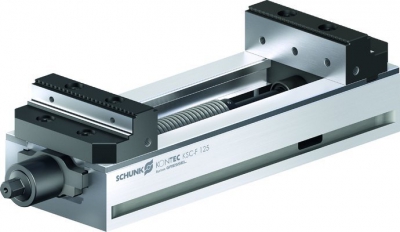 The SCHUNK KONTEC KSC-F single-acting clamping vises with fixed jaw, achieves high clamping forces at comparably low torque. Due to the 160 degree “Quick Clamp” force intensifier, workpieces are clamped in less than a second, and the vise is safely locked, making retightening with a torque wrench no longer necessary. The vise can be easily actuated by a standard hexagon connection using either conventional socket wrenches, extensions, or torque wrenches.

The actuation force is provided by a spindle and is linear. By turning the spindle, the moveable jaw is moved to the fixed jaw. The clamping force depends on the torque and the clamping range depends on the jaws being used. High clamping forces can be achieved with low torque. Because the unit uses tension to clamp, the bending load at the base body is minimized, making it easy to use with the whole VERO-S modular system from SCHUNK.