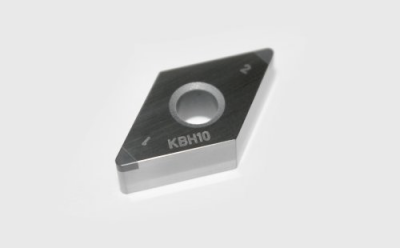 KBH10 is an uncoated PCBN turning insert that offers exceptional wear resistance and very low cutting forces. As a result, many customers are now enjoying double the tool life together with improved part quality.

Hard turning has been used for decades to streamline and in many cases eliminate cylindrical grinding operations. It’s fast, accurate, and thanks to tooling suppliers such as Kennametal, a broad assortment of predictable, cost-effective cutting tools is available to tame even the mos tdifficult hardened steels, superalloys, and chilled irons. But as the aerospace, automotive, power generation, and other industries continue to develop even more robust metals, cutting tool manufacturers must evolve as well with high-performance tooling to tackle these materials.

“We’ve seen that many manufacturers are decreasing the allowable tolerances on bearing journals, rings and pistons, gear hubs, and so on,” he says. “For example, dimensional tolerances of less than 4 μm or less are increasingly common, as are surface requirements better than Ra 0.4 μm. This new grade closes the gap for these and other customers that need superior tool life when finishing such parts.”

In one example, a well-known automotive manufacturer was able to more than double tool life—from 150 pieces per edge to 350 pieces—during an internal facing operation on a 140 mm (5.5 in.) diameter 5115 alloy steel bearing hub that was previously heat-treated to 62 HRC. And a driveshaft producer achieved similar results, increasing tool life from 250 to 450 pieces per edge when turning 58 HRC UC1 (similar to S53) steel on its vertical turret lathes, consistently maintaining a 6 Rz surface finish while doing so.

In each instance, cutting speeds of 180 m/min were used (590 sfm), with depths of cut averaging 0.15 mm (0.006 in.) and feed rates ranging from 0.22 to 0.32 mm per rev (0.0087 to 0.013 ipr). Also in each case, the customer saved thousands of dollars annually in insert costs compared to its existing solution, while substantially reducing downtime due to tool changeovers.

The KBH10 substrate is completely new. Its PCBN composition is designed for up to 20-percent higher cutting speeds while providing equivalent or in some cases far greater tool life. Kennametal engineers were frequently able to achieve Ra 0.2 and Rz 1 surface roughness, while consistently maintaining the profile and dimensional tolerances noted earlier. KBH10 is available in several different geometries and edge preparations.

“KBH10 is ideally suited for fine-finishing operations yet is tough enough to handle light interruptions or varying depth of cut operations,” says Gremer. “And because cutting pressure and therefore heat is reduced, crater and flank wear are likewise reduced, extending tool life. There’s also a lower occurrence of the white layer that plagues many hard part machining operations.”

This last part is accomplished through KBH10’s unique edge preparation. Rather than the traditional waterfall or radiused hone applied to virtually all PCBN cutting tools, Kennametal has developed a special shape that is both sharper and freer cutting than competing solutions yet still tough enough to withstand the rigors of hard turning.

“Five years ago, no one was able to generate edges like this, let alone measure them,” Gremer explains. “But thanks to some fairly recent advances in metrology and machine tool technology, we can consistently produce this hone shape, which reduces passive cutting forces by up to 40 percent. Together with KBH10’s tougher substrate—also new—we’ve produced an insert that achieves a fine balance between wear-resistance, hardness and sharpness.