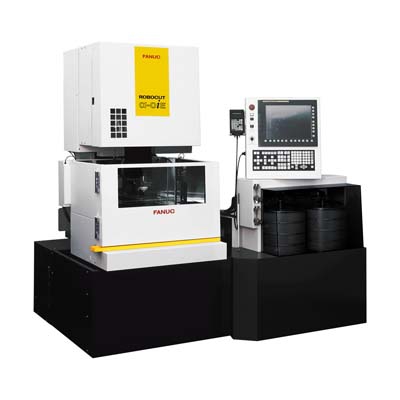 "The FANUC iE Wire EDMs are capable of better finishes, increased geometric to less than .0001" and virtually no recast," said Steve Bond, National Sales Manager for FANUC RoboDrill, RoboCut and EDM Products, Methods Machine Tools. "For example, recast is virtually undetectable at 1000:1 magnification in high nickel alloys like INCONEL and WASPALOY. As a result, we have significantly broadened the range of EDM applications."

The iE Wire EDMs are ideal for machining a wide range of materials including cobalt-chrome, high-nickel alloys and titanium often found in challenging applications such as aerospace, medical and military. The new iE Series machines feature an upgraded Ai Pulse Control II, providing high speed and highly accurate cutting for stepped work pieces by enabling optimal control based on the accurately detected number of discharge pulses. The Ai pulse control also ensures a minimized witness line at both the wire approach and step point, in addition to improved oval shape and small round hole accuracy.

In addition, the FANUC Auto Wire Feed System (AWF) has been enhanced to thread while submerged through the start hole of a workpiece with a maximum thickness of up to 8.0" (200mm). In the event of a wire break, the iE Series Ai auto wire repair system can now thread through the kerf while submerged to a depth of up to 6.0" (150mm) without returning to the start point.