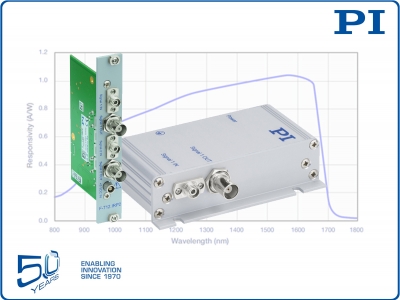 The F-712.IRP1 and its two channel sibling, the F-712.IRP2, convert optical signals in the 600nm to 1700nm range with optical power from 230 picowatts to 1.3 milliwatts into an analog output voltage of 0.1V - 1.6V. In order to be useful for fast optical alignment systems, the output signal conversion is logarithmic and optical power changes can be detected and converted with a bandwidth of 6kHz.

The logarithmic output scaling is very important for fast scans and gradient search algorithms, because the signal strength can fluctuate by several orders of magnitude within a few milliseconds, considering the minute dimensions of modern fiber optical components, such as waveguides and arrays.

The broad optical range from 600nm to 1700nm allows for usability in both the visible and infrared range without switching.

Next to the affordability of the new power meters, the compact size of the single channel version (roughly only 4x3x2 inches) is another advantage.

This photometer detects an optical input signal and converts it into a precision, logarithmic voltage signal with high resolution. The optical power meter is used to find the maximum optical intensity quickly when integrated in fully automatic, optical FMPA alignment systems.

The logarithmic scaling of the output signal is particularly advantageous for fast scans because the signal strength can fluctuate by several orders of magnitude within a few milliseconds.

The large wavelength range of the photometer enables working in both the visible and infrared range without switching.

Wafer probing, packaging. Accessories for FMPA alignment systems in all applications that do not require measuring the absolute value of the optical power.