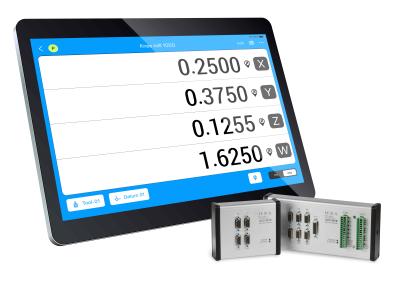 Offering machinists a pioneering way to a new Bluetooth-enabled digital readout, HEIDENHAIN presents the highly anticipated ACU-RITE-brand droPWR. This new droPWR is a first-of-its-kind system to enable an iPad® tablet to become a digital readout (DRO), doing everything an ACU-RITE DRO can except without cables between tablet and machine tool!  The droPWR will first be shown at IMTS 2022 in Chicago on Sept. 12-17.

Bluetooth technology along with an IBT interface box in the droPWR system allows connection to multiple machine configurations in one tablet including for milling, turning, and grinding machines with up to six axes.  Designed to be simple and functional, this tablet DRO can be moved and used with various machines, making it perfect for many production environments such as small shops and students in shop class.

The new droPWR takes manual machining to the next level by combining the familiar intuitive user experience from the traditional ACU-RITE DROs with modern touch screen conventions.  The new droPWR system includes the new software, an IBT interface box suitable for the machine tool and relevant encoders/brackets if needed.  A tablet with iOS 15 or greater is required.  And with its simple on-boarding configuration set up, a user can quickly establish connection to its intended machine(s).