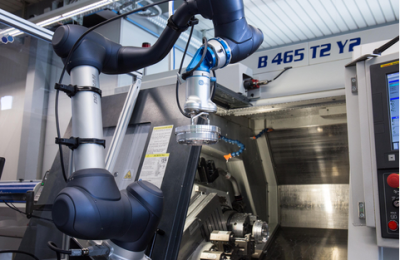 Attendees at IMTS in Chicago, September 12-17, were the first to experience what OnRobot has been preparing for years: the industry’s first automated, application- centered software platform for robotic deployment. D:PLOY is a turning point in OnRobot’s strategic evolution that began with its line of intuitive robotic tools and software, expanding the concept of collaborative automation. “The dramatic 80% reduction in deployment time is just one powerful illustration of what D:PLOY offers,” says Kristian Hulgard, General Manager of OnRobot’s Americas division. “Now system integrators can take on more projects with existing resources. Robot manufacturers benefit from dramatically greater accessibility for their products. And end users gain powerful new abilities to implement, manage, and redeploy automation across their facilities for long- term success.”

D:PLOY was previewed in a machine tending application at OnRobot’s IMTS booth #236254 using a UR5e from Universal Robots. The application demonstrates how the entire application, including any leading cobot or light industrial robot arm along with tooling, sensors, and other devices, is accessed and managed from D:PLOY’s dashboard. Users simply define the robot’s workspace with minimal inputs on points within the workspace, and enter attributes of the workpiece. D:PLOY automatically generates all the program logic, signal exchange, event handling, path planning, and real-time monitoring for the full application.

“D:PLOY is a foundational market shift that will change the way automation is deployed, expanding the market at the same time,” says Hulgard, who looks forward to presenting the first live demos at the show.

One System Solution laid the groundwork for expanding D:PLOY applications

At IMTS, users also got an up close and personal with the “One-System Solution” that laid the groundwork for D:PLOY by allowing any OnRobot end-of-arm tool (EOAT) to interface with any leading robot arm through a unified mechanical and electrical interface. At the OnRobot booth, visitors can choose between a range of EOAT and simply click the tools on and off a FANUC CRX robot arm equipped with OnRobot’s Quick Changer.

Visitors also experienced the new OnRobot Palletizer; a complete out-of-the-box, easy to program collaborative palletizing system. The OnRobot Palletizer is designed to take the pain out of palletizing processes through state-of-the-art hardware and software technology that will also launch as an application program available through the D:PLOY interface. At IMTS, the Palletizer is showcased in collaboration with OnRobot Partner Doig, featuring a Doosan M1013 robot.

Breadth of partnerships and compatibility on view in OnRobot booth

OnRobot partner Acieta also was at the OnRobot booth, showing how dual 3FG15 grippers take on a series of material handling and machine tending tasks, incorporating Acieta’s unique FastLOAD CX1000; an expandable cell for collaborative applications that can be moved and set up in minutes.

“Entering our IMTS booth, the breadth of collaborative automation and compatibility of OnRobot is immediately apparent,” says Hulgard, emphasizing the many different robot brands and applications on display. “Our offerings and the way we will now unify them all through D:PLOY will help change how we think about collaborative automation, broadening its accessibility and improving success for manufacturers in almost any industry.”