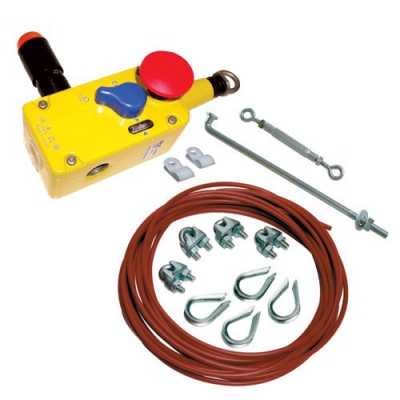 Rockford Systems LLC has introduced a new cable and push-button e-stop (emergency stop) assembly featuring a unique cam operation for faster positive stopping of metal working machines, yet is immune to nuisance tripping due to vibrations. The new assembly (CLM510) is also effective as an awareness barrier on the backside of shears and press brakes, as well as around the perimeter of other hazardous areas for reducing risk.

Simple to install on most standard machinery, the e-stop assembly includes a push-button switch with red mushroom-head button, indicator light and bulb, 21' of red PVC-covered steel cable, and cable tension kit. Because the cable is interlocked with the switch, it will actuate an emergency stop if pulled or removed from a hook, leaving the machine inoperable. Machinery cannot restart until the switch is reset.

Unlike similar e-stop devices, the assembly contact mechanism employs a cam operation for faster and safer stopping, while also providing a failure to the safe condition if the cable goes slack or is cut. In the event the cable is pulled, the contacts are opened resulting in the isolation of machine power and the engagement of the latch. The switch is reset by turning the blue reset dial from the off position to the run position.