Poly – Poly - or what? Part 7: Stumbling blocks on the way into the automotive world …

Author Horst Lach
Published
April 15, 2019 - 08:45am
When you read this, 40 years will have already passed since the discovery of spark erosion for machining polycrystalline cutting materials. Lach Diamant named this process “spark grinding,” which accompanied the development of proprietary machines. Polycrystalline diamond tools conquered a multiple-application market traditionally reserved for carbides. Diamonds, baked under pressure and heat during synthesis, made this possible.   The sharp cutting edge of PCD-tipped tools, together with tool times far superior to carbide – 50 to 300 times better – created perfect conditions for testing the limitations, or rather possibilities, in a growing industry.

In the 1970s, development and use of PCD tools were, with few exceptions, limited to the production of so-called “indexable inserts.” This term is quite wrong, since PCD was simply soldered onto one side of these inserts. After the discovery of spark erosion (1978) for the systematic removal of polycrystalline electroconductive particles such as polycrystalline synthetic diamonds (PCD and boron nitrides PCBN), this should change. Since 1980, progressive developments in electrical discharge grinding (EDG) and wire EDM turned the “niche tool” PCD into a global player.

A selection of PCD and PCBN inserts, developed during the 1970s, for milling and turning.

Many industries have profited from this in the most literal sense of the word during the last decades – first and foremost the automobile industry by implementing the principle of “energy savings through light-weight designs.” This success would have been unimaginable without PCD tools. Other pioneer accomplishments include the aircraft industry, machining of propellers in the wind-turbine industry and in general the wood and plastic (composite) industry, even spanning to achievements in electro engineering and in medical technology. The list could easily be continued. Whoever thinks that we are at the end of this development is mistaken. For example, laser technology will one day be so advanced that it will take its place as an efficient, precise manufacturing alternative, next to spark erosion and grinding.

Regarding further developments of the supply of polycrystalline synthetic diamonds (PCD) by the “biggest” suppliers for the tool manufacturing industry, I must express my scepticism whether we can “soon” expect significant improvements in one or the other components for advanced production and use.

Originally, we were talking about names like GE Superabrasives or DeBeers. Today, PCD buyers must get used to the fact that the respective companies and departments have changed owners and names up to four times. Other, additional products intermittently offered on the market, such as mono diamonds and CVD (chemical vapor deposition), do not make any difference in this regard. The latest DeBeers/ Element Six product – so-called “Labour-made” jewel diamonds on CVD basis – are by the way currently the hype on the jeweller market. Such diamonds (brilliants) should be offered to consumers at a 70% “cheaper” price, and via a separate distribution channel than to natural diamonds. DeBeers/Element Six is building a large production facility in Pennsylvania for these “Labour-made” gem diamonds. Sales in the U.S. have already started, branding it “Lightbox Jewelry.” 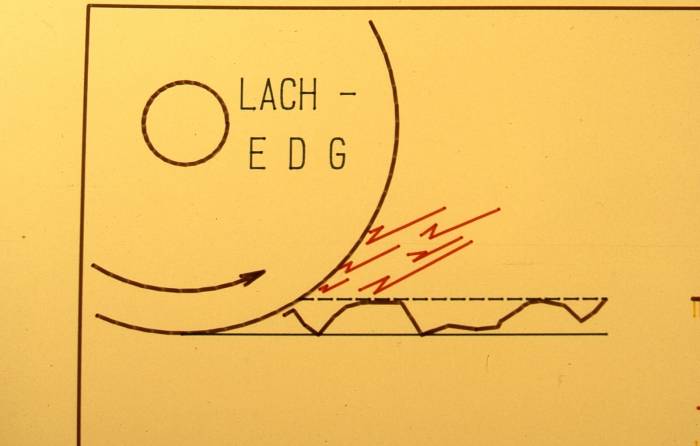 A diagram of spark erosion grinding with rotating electrode, either graphite or copper.

The Beginning of a Success Story

Please accompany me now to the beginnings of forming and rotating PCD tools with an all-encompassing focus on the automotive world. So far, we touched on the here and now. Back to the year 1980. One of the questions at the time was: Is it possible to transfer the looming success of PCD tools in the industrial series production of wood and plastic to the metal and composite industry?

From a historical perspective, this question was initially posed to Lach-Spezial-Werkzeuge GmbH, which was worldwide the first manufacturer of diamond tools for machining all wood and plastic materials (Feb. 1979 – see part 5 of this article series “Poly – poly – or what?”).

Lach-Spezial is the sister company of the family-managed Lach Diamant Jakob Lach GmbH & Co. KG., founded in 1922. It developed from a diamond grinding shop for natural diamonds with approximately 600 employees, and already in the mid 1930s, it had targeted the metal industry with a special program. Initially, it included industrial diamonds for dressing conventional grinding wheels in the automobile, ball bearings and rolling bearings industries, but in the early 1960s the programme was extended, and e.g. natural turning diamonds were offered for turning copper commutators for the electrical industry (Bosch, Siemens, AEG). The following production of resin- and metal-bond diamond and Borazon/CBN grinding wheels completed this program.

After the discovery of spark erosion for forming polycrystalline cutting materials, it should now become possible to offer more and more customized solutions for the use of PCD tools (see part 1-3 of this article series “Poly – poly – or what?”). Why was this not implemented – or better – why could this not yet be implemented during the early 1980s? Analogous to the successful introduction of diamond tools in the furniture industry? 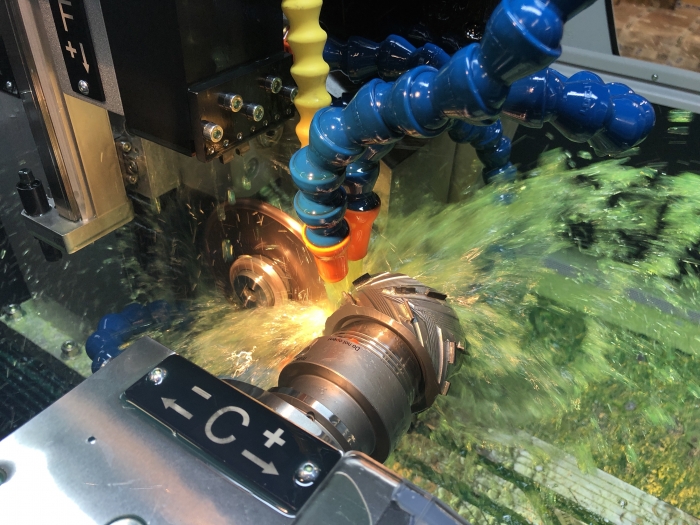 The answer could be explicitly clear: The automotive industry was not ready yet to fully use the advantages of PCD tools in serial production. It was easier for woodworkers. During my preparation for LIGNA 1979, I could already assert, that at that time the machine development in the wood industry already fulfilled the requirements for the use of cost-saving, long-lasting PCD diamond tools.

An example: multiple-axis routers on which it was already easy to measure the advantages of PCD endmills/profile mills compared to carbide. Of course, the same applied to the immediate success of diamond tool combinations on so-called double-end profile machines.

Only one driving force is the appropiate explanation for the rapid acceptance of diamond tools in the furniture industry: the stakeholders. At the time, all necessary decisions during the introduction of polycrystalline tools were shaped by medium-sized enterprises: All manufacturers of PCD tools – without exception family-managed companies – and equally the buyers, therefore the decision makers. Incidentally, I experienced identical developments not only in Germany, in Europe and in the United States, but also worldwide. The “big players” often came much later – manufacturers as well as buyers.

Let’s refocus on the status of PCD tools in the automotive industry at the beginning of the 1980s. Using PCD tools for the external and internal turning of materials such as copper, electrographite carbon and, of course, aluminium was fairly well known. The same milling heads previously fitted with carbide inserts were now available for the starting production of aluminium engines and upcoming milling tasks. Soldered PCD milling heads were at that time not yet a solution for aluminium machining.

A look at the (still existing) Lach production and order book, beginning with the first entry in 1979, tells us the following: The first so-called dreboform PCD profile turning tools/threaded steel/endmills et al. were successfully used for machining nonferrous and composite materials at customers such as Rowenta in Offenbach, Grundig in Georgensmünd, Messerschmitt Bölkow Blohm GmbH in Donauwörth, Waldrich in Coburg, FAG in Schweinfurt, Behr in Wendlingen, Bosch in Stuttgart, Fokker in the Netherlands and Vielmetter in Berlin. 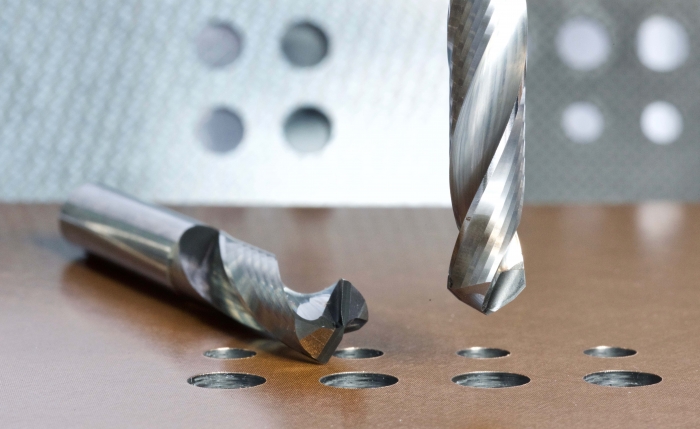 The PDC spiral drill »PS-plus« is for machining composite materials.

From the many press releases covering this issue in 1980, I quote an excerpt from the trade journal “Produktion” in March 1980: “In excellent shape with long tool times: Nothing is more precise than diamonds. Synthetic diamond cutting edges for machining nonferrous and plastic materials are unstoppable. New grinding procedures (this refers to Lach DiamantI’s so-called spark erosion method) made it possible to produce blades from sintered diamonds in any desired shape and form. Ground into shape, they are perfect for turning and milling aluminium, brass, copper and various carbon and plastic composites. The blade can be shaped in any manner, concave or convex, similar to a saw or threaded profile, with all conceivable options up to a maximum insertion width of 13 mm” (at the time the available maximum for PCD) – today 70 mm to a maximum width of 100 mm.

Other press reports of this year allow the conclusion that expectations regarding the future use of PCD tools in the automotive industry had increased enormously. A quote from “Fachberichte für Metallbearbeitung” Nov./Dec. issue in 1980: “Tripling today’s production capacities (as announced by Lach Diamant at FAMETA 80 in Essen and Stuttgart) promises security to consumers in a now economically viable machining technology – and ultimately, this is attributed to Lach Diamant as a counter-initiative to the Japanese challenge.”

This also indicates the contemporary mentality at a time when pros and cons of numerically controlled machines and robots were intensely debated for serial industrial production.

The keyword “Tradeshow FAMETA 80 in Essen” gives me an opportunity to point out another event, quasi a world premiere. At that time, PCD monoblock milling cutters, straight-edged as well as profiled cutting edges, were already in use in the furniture industry, particularly in the kitchen cabinet industry. 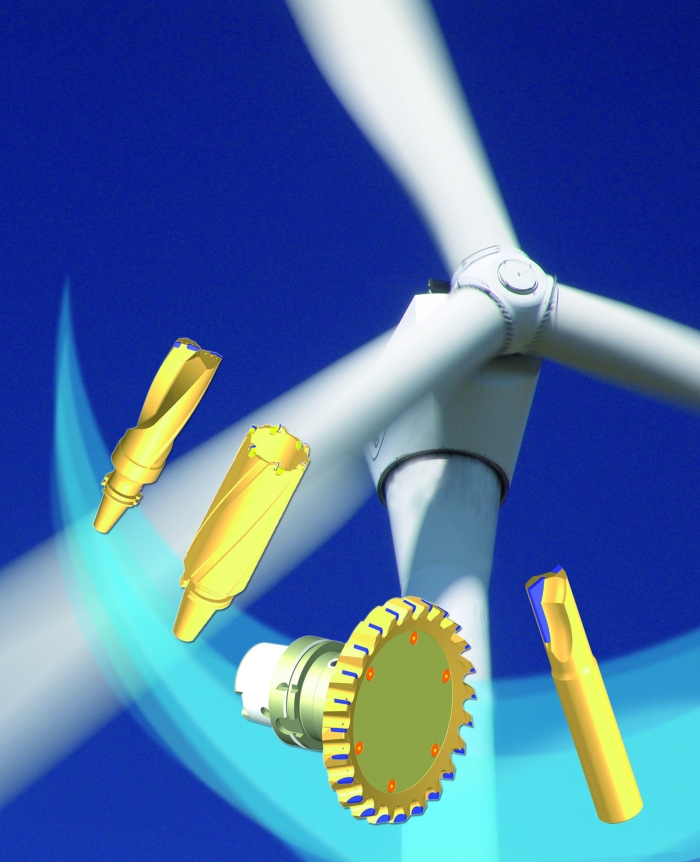 Time not Right Yet

Actually, this presentation already established the basis for the introduction of soldered monoblock PCD milling cutters in the automotive industry, but, unfortunately, the time was – even in retrospect – not quite right for this yet.

Another showstopper was at the time the developmental stage of numerical controls; there were initial approaches from perforated discs to punched tapes for scanning specified machine data. But compared to today, these were small beginnings to successfully execute only a few electromotoric axial movements. The real takeoff into the future of freely programmable controls can be pinpointed between the years of 1984-1990; starting with the design of toy computers and going as far as the complete replacement of perforation strips for tooling machines.

Now you will ask yourself what happened at FAMETA 80 during the premiere presentation of monoblock PCD milling cutters for aluminium machining? You will be surprised to hear about the following developments, which also lead to an international patent. You can read more about this topic in the next article of “Poly – poly – or what?”