Where do we come from – what is our destination? This was the question after the first introduction of this new cutting material “polycrystalline diamonds” (PCD) at the Hanover Trade Show in 1973.

Despite the word “poly,” the basis here is “diamond” (Greek: Adamas), naturally created from carbon, in the depths of the earth under heat and pressure over millions of years. Diamond in its monocrystalline form is still the hardest of all things. Even before people discovered its beauty – “diamonds are a girl’s best friend” – they made use of the hardness of this “indomitable” material in the earliest archaeological sites in India, e.g. for the turning and levelling of mill stones. 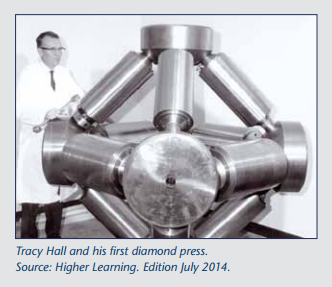 The industrial revolution, starting in England around 1770, and its powerful continuation in Germany in the mid 19th century would not have been possible without diamonds. They were instrumental, especially for the production of steam engines and locomotives. More precise grinding machines, studded with wheels for steel grinding, had to be developed, and without diamond dressing tools, only geometrically distorted surfaces would have resulted.

The demand for natural diamonds from Brazil and Africa skyrocketed during the following 100 years – and gained strategic importance due to both world wars. There was an increased need and desire to grow diamonds or to produce synthetic diamonds to become less dependent on the commodity markets in London and Antwerp. 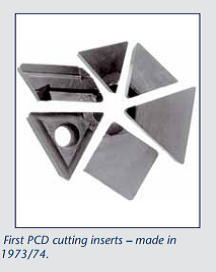 The Engineer Who Implemented Ideas

So it is no wonder that in 1954 engineer Tracy Hall was the first who succeeded in growing synthetic man-made diamonds in the U.S. using a specially developed high-pressure press. When General Electric first marketed these synthetic granulated diamonds, with sizes of approximately 170 microns, under the brand name “Man Made Diamond” in 1957, it was one more step towards another technical revolution, which, to this day, is affirmed through new innovations. Once again, it was Tracy Hall who ‐ in 1967/68 -­ implemented the idea to bake very fine diamond grains with carbide as a carrier material during synthesis. He was successful: The first step towards a so-called polycrystalline synthetic diamond cutting material had been accomplished.

EDG, or electrical discharge grinding (for dividing the round plates, which at first had a diameter of approximately 3.2 mm) had not yet been discovered. Therefore, the carbide had to be scored with electro-­plated diamond cutting discs
to be able to break off either 90 or 60 degree segments afterwards. 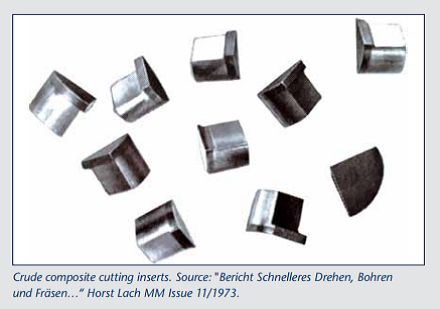 A New Cutting Material and the First Users

What to do with this new innovation. General Electric's managment must have been faced with the same question at that time. After all, in 1966/67 the key "monopoly players General Electric and DeBeers had introduced metal-­coated diamond granulation and achieved super adhesive strength in resin-‐bond grinding wheels, which in turn made the use of carbide tools efficient for the industry for the first time.

It was said that General Electric had good reason to protect its own carbide business within the corporate group, referring to its subsidiary Carboloy. Nevertheless, the up-and-coming managers under the leadership of Louis Kapernaros must have prevailed within the big GE family. It was decided to provide samples of the new cutting material to three or four selected diamond companies, including LACH DIAMANT. Apparently, GE was curious to see whether the company, known as “Borazon Pioneer” since the introduction of the CBN grinding wheel in 1969, would once again come up with a lot of new ideas.

It was in the spring of 1974, shortly before the Hanover Trade Show,  the second year after the first PCD presentation. Since the introduction of PCD for manufacturing copper commutators, we had practiced PCD turning instead of grinding and had tried to win new customers among aluminum processing companies such as Westinghouse, Voith, Solex and Oechsle, an enthusiastic PCD customer, which is still surprising to me today.

The company worked with polyamide synthetic materials, and produced small gears with imprinted numbers for the production of vehicle odometers. Looking back, many new and unusual applications were added within a short period of time,  e.g. the Dutch manufacturer for meerschaum pipes who could now produce the mouthpiece faster and more precisely. As a thank you, he brought his latest pipe selection to each trade show for several years, which was a special delight to our sales engineer, Günter Hobohm, a passionate pipe smoker. 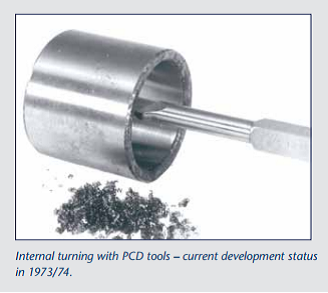 The automobile industry, later the main user of this new technology, was not one of the first users. An attempt of a North German diamond tool manufacturer to replace natural diamonds in the turning process of motor pistons could not be successful at this time. The poly cutting edge was considered to be too rough due to its poly saw character. This only changed many years later when it was discovered that its "roughness" would be perfectly complementary to an elastic film of lubricant; broken down cars with seized pistons would be seen as a distant memory.

This new business segment, which had been growing rapidly within only a few months, also influenced the strategic planning at LACH DIAMANT. A newly finished industrial building, initially meant for the similarly booming branch of diamond and Borazon CBN grinding wheels, was turned into the first production facility for PCD tools. From now on,
LACH DIAMANT PCD tools were marketed under the registered name dreborid. At that time, the grinding wheel production moved into a neighbor building, a large facility that happened to become vacant and stayed there until 1984 when we moved to Donaustrasse in Hanau. 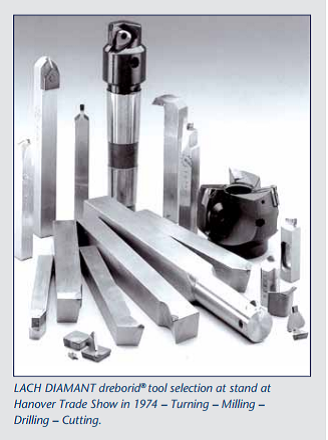 Rapid growth, combined with the demand for shorter delivery time, forced us to find better conditions for grinding this "beastly material" (as our former Master Diamond Grinder Konrad Wagner dubbed it at that time). After a search for a suitable machine, we finally found it at the Kelch company. In the following years, this machine was further adjusted to the particularities of PCD grinding. After taking over the license and construction, LACH DIAMANT is still building this machine, referred to as ››pcd-­-100/300‹‹. Thereby, we were perfectly prepared for the manufacturing of so-­called “single-­tipped” tools for the trade show in 1974.

What kind of innovations did LACH DIAMANT deliver for the future use of PCD tools? One example was PCD‐tipped
carbide, according to ISO. After discovering that PCD cutting edges could be reground multiple times, customers wanted to continue to use carbide clamping devices for turning and milling cutting inserts. Milling? PCD milling was born. 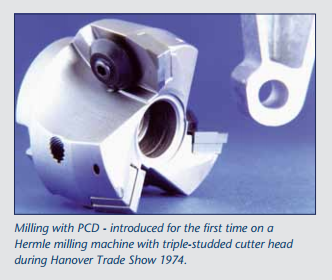 The highlight at our trade show stand in1974 was therefore PCD inserts for turning and milling. PCD milling was demonstrated as a new technology on a Hermle milling machine with 5,000 rpm and equipped with a triple-­studded
cutting head. Aluminum and Duroplast parts, as well as composite materials, were milled.

At that time, interest could be called “enormous” – it was simply a success. At least until the alarmed junior manager of a North German company (back then considered an industry leader) appeared at our stand and asked reproachfully why LACH DIAMANT dared to show PCD tools for milling. His company had applied for the patent for this technology. At least two licensees had already been won in the Württemberg area. 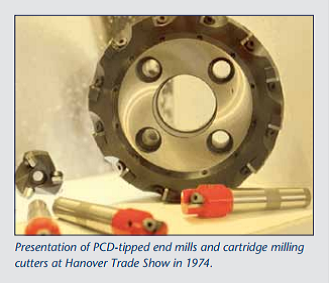 Well, in the end, the discussions at the trade show resulted in a free license for LACH DIAMANT. And as the reader might have already guessed, the patent came to nothing. It is only mentioned in passing that another technologically
sound idea was born during those days – reaming with PCD, an application we then discussed with a young man from Swabia for a potential cooperation.