The introduction of our Borazon CBN grinding wheel was still in full swing when I received information from General Electric in 1972 that a new cutting material would be coming soon. What could it be? Naturally all of us were curious!

The Hanover Trade Show would start April 26, 1973. A new cutting material meant another chance to showcase another innovation, like Borazon, as one of the first companies, or the first, worldwide. After successfully introducing the new abrasive Borazon, I expected preferential treatment compared to other competitors.

Answers to my requests for first samples or test materials were delayed. It was already March 1973. Despite the secrecy of General Electric, I managed to pick up on two littleclues: compact and poly. 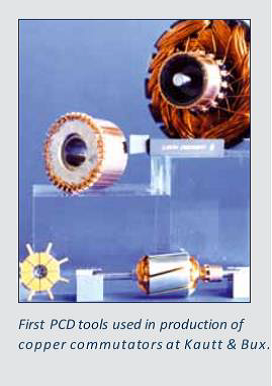 I was fascinated by the possibilities that seemed to open up on an almost daily basis in regard to the new Borazon CBN grinding wheels. At first I thought that “compact and poly” might refer to compressed cubic boron nitride. That would have been great for LACH DIAMANT since we already had a lot of experience with the Borazon CBN grinding wheel: Grinding of high-alloyed hardened steel and HSS; compact CBN; turning instead of grinding, fantastic!

As it happened, we then also received a request from DEW. The company wanted to know whether LACH DIAMANT could offer any tools for machining DEW’s “Ferrotitanit.” This new and compact CBN material was so exciting for DEW’s management that two of their directors paid us a visit only a few days later. They must have been very
disappointed when I had to tell them about 3 weeks later that we would use not a CBN material but a polycrystalline
block of synthetic diamonds. PCD, or polycrystalline diamond, was born! To be honest, I was a bit disappointed too, at first.

Compact CBN would have been something to work with immediately. But a “diamond block” as substitute for natural diamonds? At the time, in April 1973, we employed about 20 grinders for natural diamond for the production and service of natural turning diamonds for customers like Bosch, AEG, Siemens, Menke and others. Should we now
switch completely to synthetic diamond blocks?

We would have to find new customers to stay profitable. But how and where? At the time, the only way to find new potential customers was via the ABC of German Industries, a handbook of national companies. I found one Swiss
commutator manufacturer and the name “Kautt & Bux.” I called them and found out something surprising: Commutators are not turned, but ground in a very time-consuming procedure. At least that was the case in 1973.

I spontaneously explained that they could save several minutes of grinding time if they would instead replace this procedure with turning with the new PCD turning steel; they were impressed and promised to visit our stand at the Hanover Trade Show. At this point, my suggestions were only of a theoretical nature, since we did not have the
material yet. But in the hope of a timely delivery for the production of the first PCD turning steel, we planned to set up a Weiler turning machine at our stand to do a demo presentation on it.

After General Electric had published the first announcements that the new material would allow even for interrupted aluminium cutting, we decided to demonstrate with a “blemished” aluminium round part with several cross-bores. Natural diamonds are the hardest of all materials, however, they are very sensitive to shock, especially during
interrupted cuts. However, the new material promised not be affected by this. 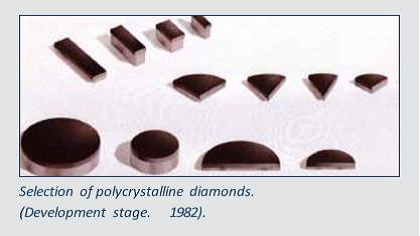 Finally, the long-awaited PCD material arrived as 90° and 60° segments, which had apparently been cut out from a 3.2 mm blank. The visible PCD diamond layer was about 0.3 – 0.4 mm thick and connected via a carbide support so that the cutting edge could be further manipulated by soldering. It was now Friday – exactly 3 business days before the start of the Hanover Trade Show on April 26, 1973. I proudly presented the first PCD to Kurt Wagner, manager of our grinding shop and a highly talented diamond grinder who had mastered his art as a diamond specialist at a Swiss manufacturer for diamond tools.

After careful inspection and several grinding attempts on a cast grinding wheel that was apparently used for natural diamonds and coated with diamond dust, he announced: “Sir, usually we do everything, but this stuff is so beastly – there is nothing we can do!” I thought, that this was probably the end of it.

There were few other grinding options. But then I thought of our Simon steel grinding machine (L15). We had purchased it for our cooperation with Simon, Neu-Isenburg, a distributor of resin- and metal-bond diamond wheels. I suggested: “Try it with the Simon machine, with the cup wheel.” And to our great astonishment, the very first
grinding attempt with a resin bond diamond grinding wheel proved already to be very promising. However, we still had to spend several hours to get the desired cutting geometry. 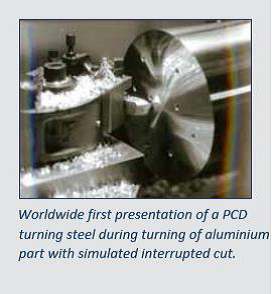 Right at the start of the trade show, at 9 a.m., our driver, Mr. Barmus, arrived at our stand and delivered the first PCD tool which would later be known under the trade-marked name “dreborid.” The driver delivered additional turning steel, on Wednesday and Thursday, until we explained to him that “this stuff will hold long enough, we do not need any more tools.”

Our visitors could hardly believe that this “little diamond cutting edge” could machine the perforated aluminium turned part without any “rumbling.” We became more and more confident and increased the feed with every attempt up to the maximal edge width. We only succeeded to “kill” our PCD cutting edge on the very last day – it could not cut an (empty) piccolo bottle, which we had boastingly inserted.

By the way, the technicians of Kautt & Bux were there as well and excited about the demonstrations. A first key customer for serial use of dreborid PCD tools was found – so Kautt & Bux can boast to be the first company worldwide using PCD in production. This was a stroke of luck for LACH DIAMANT because in the process of turning the surface of copper collectors, we also learned how PCD can be successfully used with other composite materials.

Success followed success – a new era of machining of nonferrous metals and plastics had begun.