The fact that polycrystalline diamonds (PCD) could “show profile” (also see 4th and 5th part of “Poly – poly – or what?”) in October 1978 could be attributed to random chance, but could it have something to do with “luck”? But how did golf professional Tiger Woods answer when a journalist pointed out that he often had a lot of luck during his games? “The more I train, the more luck I have.”

In my – our – case this is true indeed. Training is possible. To listen carefully, process everything, and come back to it at the right moment, and put it all together at the appropriate moment.

More or less like when my father Jakob Lach told me that electricity played a role in grinding natural diamonds. This remark alone, sparked a thought while reading an advertisement for spark erosion machines by the former company Matra, and led to the discovery of spark erosion for forming polycrystalline diamonds. And now subsequently led to “Poly – poly – or what?” –  Quo vadis – where are you going?

At the time of LIGNA 1979, the international trade show for machines and equipment for the wood industry, polycrystalline diamonds had only been available to the tool industry for six years – and polycrystalline boron nitride cutting edges only for five years – both from the manufacturer General Electric Superabrasives. The diameter of a PCD blank was 13.2 mm maximum (see image 1). 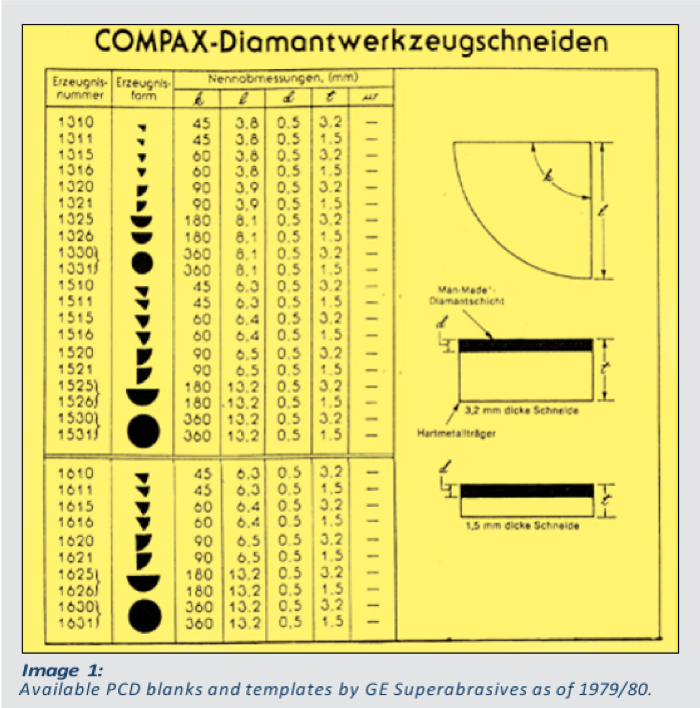 Not Good Business (yet)

At that time, the production of polycrystalline cutting edges might not have been good business for the manufacturer (yet). Generally, this was related to the total sales success of General Electric Superabrasives, with a manufacturing site in Worthington, Ohio, and within GE’s corporate organization subordinate to the GE bulb manufacturer.  A subsequent conversation with General Manager Louis Kapernaros indirectly confirmed this. Up to LIGNA 1979, polycrystalline cutting materials were, with few exceptions, only used for mounting so-called indexable inserts (see article “Poly – poly – or what?”, part 5).

During the introduction of PCD tools, the automobile industry only played a minor part at first. Two major events had to create the basis for today’s essential role of these tools for serial production. The oil crises of 1973 and 1979/80 – initiated by wars in the Near East and consciously reduced oil outputs – demonstrated to the world our dependence on this type of energy. Many of us can still remember obligatory fuel saving measures, weekend driving bans and the inevitable petrol coupons when taking a trip abroad.

For the first time, the wish for new energies came up – even climate protection was not excluded from the discussions. Petrol guzzling motors were critically examined. Motors were to become smaller and yet more efficient – and for the first time, weight reduction became an issue for the entire automobile industry. Robots were already known to be used in serial production in Japan. Robots are fine, as long as they fit into the “work environment,” but with what kind of long-term tools? And especially during machining of promising, weight-reducing aluminium components? You already know – the decision had to be in favour of polycrystalline diamonds.

A little anecdote regarding the now following wave of requests for aluminium machining tools from the automobile industry. Since there were no numbers regarding the tool life of PCD tools in the serial production of aluminium components at the end of the 70s, standard consumption data for carbide tools were used as orientation. Therefore, the demand specifications were based on very high PCD quantities.

However, the initial enthusiasm of PCD manufacturers receiving these requests and orders quieted down – since the quantities had to be drastically reduced after a few months. The tool life of the cutting edges of PCD tools surpassed that of carbide cutting edges by up to several-hundred fold. 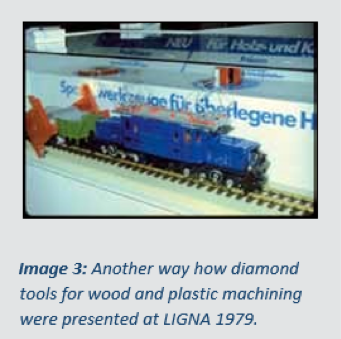 Back to LIGNA 1979. Lach-Spezial-Werkzeuge GmbH had only been founded in February (see “Poly – poly – or what?”, part 5). It was preparing to be the world’s first company to introduce a complete diamond tool and saw programme for the wood and plastic industry. Of course, from the very start the Lach specialists faced the question, how the audience, the industry, would react to this world premiere: “Diamonds for wood and plastic? – Has Lach lost it now?” These were indeed some of the comments during LIGNA where we featured the entire diamond tool program at a large stand, accessible from three sides (see image 2 and 3).

In the meantime, Lach-Spezial diamond tools were already used at selected customers of the wood and plastic industry, e. g. Resopal (see article “Poly – poly – or what?”, part 5) and Messerschmitt-Bölkow-Blohm GmbH in Donauwörth and Augsburg. This was the beginning of a successful collaboration.

The trade press, provided with information about the economically efficient, cost-reducing use of diamond tools for machining wood and plastic, witnessed with their own eyes the at first cautious and then enthusiastic activities at the Lach-Spezial stand. In short, it was all in all a very successful introduction of a new technology.

Employees of GE Superabrasives who visited the stand were able to gladly report back to the U.S. that now more PCD than before could be sold. This was also thanks to the discovery of spark erosion which initially made the commercial production of polycrystalline milling tools possible. Now they could focus on the production of higher quantities  - and where appropriate even invest in larger diamond presses. To date, we had to use PCD blanks with 13.2 mm diameter and stack them according to the width of the milling machine.

In any case, for GE these news must have been pointing the way into the future. Consequently, the blanks supplied became larger in diameter – e. g. from 13.4 mm and 30 to 52 mm up to 58 mm today.

Not to mention that in time for LIGNA, an “old” supplier of natural diamonds, DeBeers, promoted and called attention to a synthetic PCD product named Syndite. 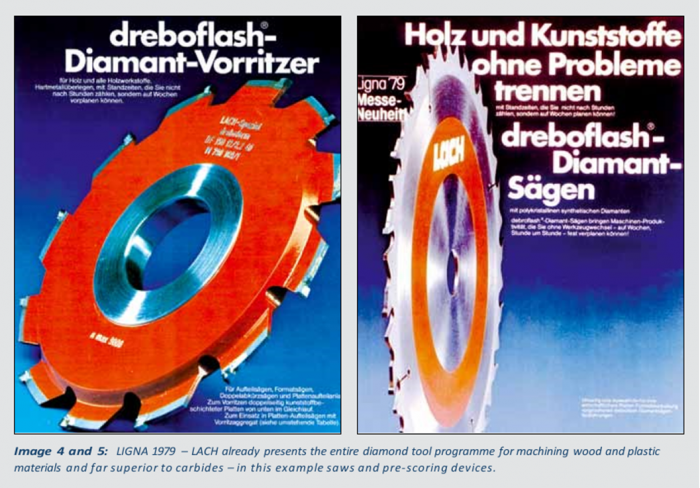 PCD on the Tool

Eventually, even traditional wood tool manufacturers had to deal with the “newcomer” Lach-Spezial who did not only have diamonds in its “kit” but also PCD on the tools. Milling tools, scorers, hoggers, saws, etc. – and these tools were supposed to have a tool life up to 250 times longer than that of carbide tools (see image 4 and 5).

At this point, this was understandably an uncomfortable situation for manufacturers of carbide tools for wood machining; carbide tools had been very successful, thanks to synthetic, metal-coated diamonds and grinding machine developments for wood machining tools as the key elements. And now diamond – as superior cutting edge material compared to carbide? Start all over again?

In retrospect, it was not easy at times to face the arguments of competitors. Lach quickly realized these long-lasting diamond tools needed a stable, compact seating and securely soldered the PCD to the steel base. This was an opportunity to warn potential users of dangers to life and limb – also for the machine – due to detaching, chipping diamonds.

This might also have been the reason that all shown diamond tools on double end tenoners in the Lach-Spezial videos (www.vimeo.com/206233393 and www.vimeo.com/206231829) were all mounted on older machines (see image 6). 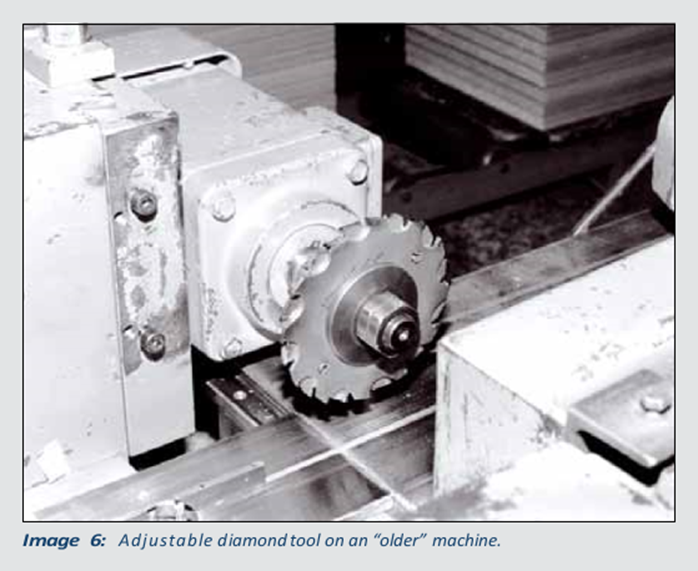 To guard against such argument, which would impede the market introduction, Lach-Spezial had a profile milling machine 180 x 15 x 30, R = 6.5, polycrystalline diamond as cutting material, Z = 2 + 2 (soldered) examined by the testing center of the occupational association for wood machining tools. The test certificate BG-Form #81016 is still available today. This also applies to the examination according to BG Test (ZU-8701) (see images 7 and 8).

After first endmilling cutters with straight blades appeared officially or unofficially among competitors at LIGNA 1981, even customers who had been hesitant to use Lach-Spezial diamond tools now said: “Now Lach is right after all. We can now go directly to diamond specialist Lach-Spezial …” – and that’s what happened. 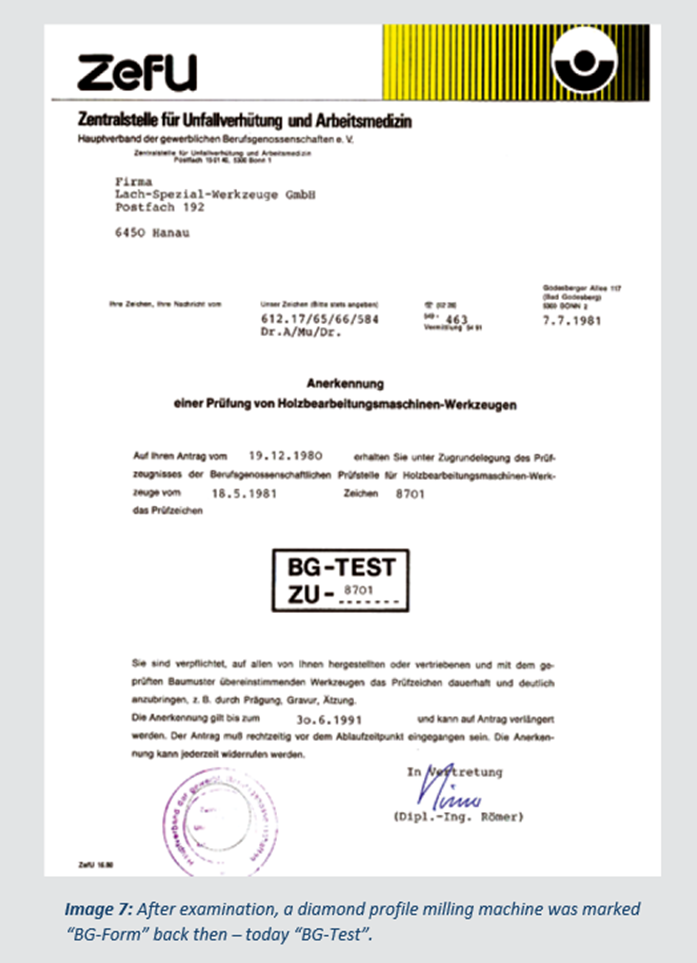 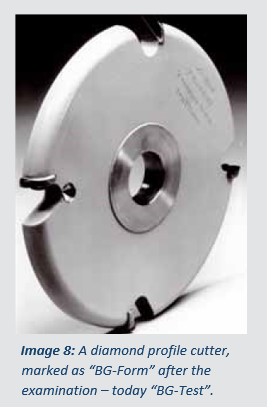 The trade press (see press review 1979-80-81 on www.lach-diamant.de) had already formed their opinion. “Oberfläche Jot” reported already in September 1979: “Diamonds machining wood and plastic – The introduction of Lach-Spezial programmes at LIGNA ’79 was for wood and plastic machining like a view into the future that had just begun. The featured dreboform diamond profile milling cutters do not only mill wood and plastic with the same precision as previously used carbide tools – dreboform diamond profile milling cutters surpass the tool lives of carbide tools by several-hundred fold.

One can easily imagine what this meant for serial production alone, e.g. kitchen and office furniture, where tool changes rendered machines unproductive for up to two hours. Another trade publication, “Holz – Die Österreichische Möbelzeitschrift 8/7,” reported: “A technical sensation from America is now also offered for wood machining: Tool cutting edges made from polycrystalline synthetic diamonds. It will be shown whether these new tools are efficient for wood machining and how the new diamond tools will be applied in the future.”

As a reader of the article series “Poly – poly – or what?”, by now you already know better; not to mention your own experiences. The 5th and 6th part of this historical review was dedicated to the first few months of the presentation and introduction of diamond tools in the furniture and wood and plastic industry in regard to LIGNA 1979. 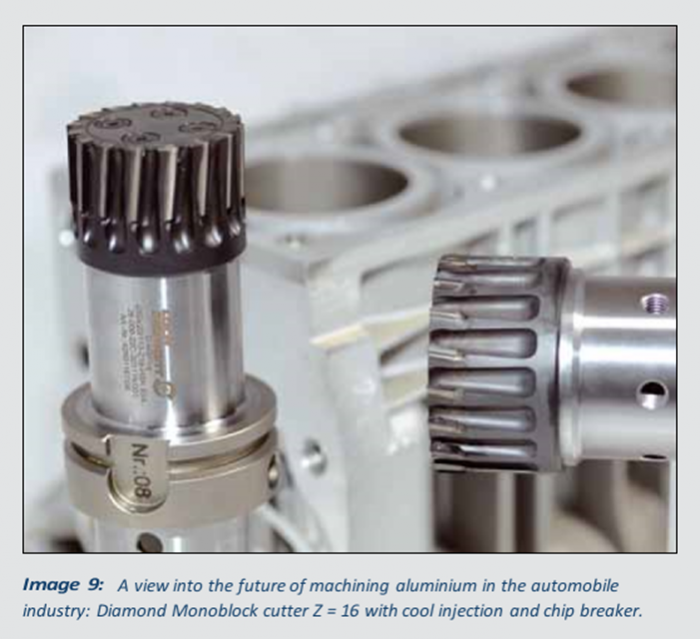 On the Agenda for the Future

The demonstrated use of PCD as a superior cutting edge material for wood and plastic machining was only the mere beginning of their future potential (see image 9).

These results soon lead to the implementation of polycrystalline diamonds in the automobile and aviation industry, and even the later adoption in the wind energy industry – just to hint at a few future topics. You might also be curious how diamond tools changed the furniture, parquet and composite industries, especially in Europe and U.S. up to this date – even the milling of conventional grinding wheels will become a topic among possibly many other topics.

The author will show the further development of polycrystalline diamonds from his own experience. True to the title of this sequence “Quo vadis – Where are you going?”