Between 1974 and 1976, polycrystalline cutting materials, such as PCD and PCBN, could show their potential for the first time. As a result of the hardness of diamond, combined with the sharpness for machining tasks, the superiority of PCD was displayed early on when turning, milling and drilling.

Nevertheless, this particular cutting material was at that point still a niche produce. The world of global players within the automotive industry had not yet discovered it or had not yet realized its cost-cutting potential. There were several reasons for this. When PCD was first introduced to the industry in 1973, tool manufacturers had only been able to grind carbide, a similar cutting material, efficiently, i.e. in a cost-effective way, for about five years. The grinding wheel that was available for producing carbide cutters at the time played a role in this. 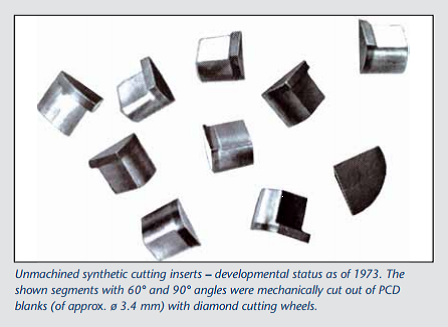 Until around 1967, diamond wheels were only referred to as polishing wheels, and therefore were not suitable for pregrinding processes. The reason for this was that the synthetic and natural diamond grains in resin-bond grinding wheels would fall out of the bond after approximately a third of their product life. Only after the diamond grains were coated with nickel cobalt, an innovation of the company Asea, was it possible to create a lasting coralline surface connection between the resin bond and the individual diamond grains.

Pregrinding of carbides was now possible and initiated a boom-like upswing of the carbide industry. It could be questioned whether polycrystalline cutting materials came too early for the industry. 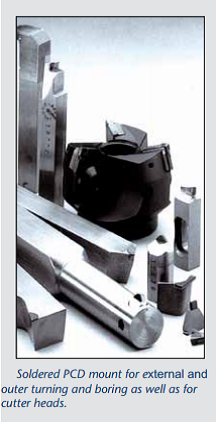 PCD – Too Early for Many

In this regard, in the beginning of the 1970s, turning machines with microprocessors for CNC production did not yet exist. The first attempts were made about 1978. Until then, turning was mostly done manually, outside of a few exceptions with perforation stripe control. For the carbide industry, and especially, for the booming manufacturers of carbide tools, the synthetic and, at the same time still controversial, PCD definitely came too early.

At the time, there was no automated production, as microprocessors were not introduced into the machining world until 1978, with one of the first turning machines. Aluminum had to wait some time until its successful breakthrough into the world of motor manufacturing. In other words, mass production of automobiles. 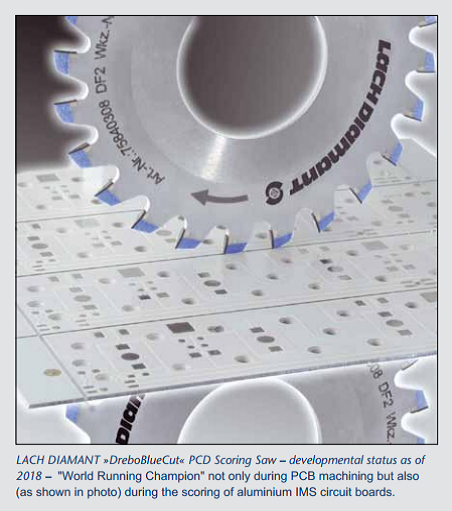 Not only the grinding of natural diamonds was “complicated,” but also and even more so, the grinding of “nongrowing” PCD. Therefore, the diamond experts were expected to deal with this exotic PCD. This is more or less how it could have happened that Lach Diamant concentrated more and more, and with increasing interest, on this new cutting material. Because of our decades-long experience in manufacturing and service of turning tools made of natural diamonds for overturning copper commutators for customers like Bosch, Siemens and AEF, we were made aware of manufacturing problems during the production of raw commutators, and the solution found in PCD.

PCD tools had been developed based on the earliest requirements and focused on the use of turning tools with soldered cutting segments with 60° or 90° angles. Even though milling with PCD was already a highlight of the Hanover trade show in the spring of 1974, its use was limited until the end of the 1970s to carbide plates, which were clamped into cutter heads. They consisted of a soldered PCD cutting edge and small-shank tool with at the most three cutting edges.

We have to consider that all then-available PCD cutting edges had to be tediously cut out of a 3.4mm or, at the end of the 70s, a 6.4mm blank, which left only little scope for spectacular depth or width of cut. Furthermore, the prevailing textbook opinions about diamonds were still in too many heads during this phase: “Diamond is only suitable for polishing gold and silver and some nonferrous metals, but by no means suitable for uninterrupted cuts.” 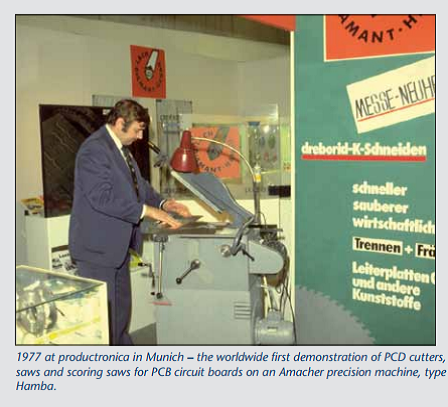 Of all things, the announcement of a show, which was until then unknown to me, in hindsight proved to be a turning point for the implementation of PCD tools. The productronica, in 1977 in Munich, announced as a component show for the electronic and circuit board industry, caught my attention. Circuit boards? The basic material is glass fiber-reinforced plastic, which is something we know. We had successfully cut this with PCD, even dust-free.

To demonstrate this successfully at the trade show, a demonstration machine was needed. We found it at AEG in Seligenstadt, where the company manufactured circuit boards for domestic use. It was a Swiss-style machine from Amacher. Three processes could be shown on this small, precision machine, type HAMBA: cutting, scoring and edge machining.

We registered for the show. We placed an internal work order for the three PCD tools, or rather saws, we needed. The only objections were raised by production: “How are we supposed to grind these rotating tools? It will take forever.” Indeed, to finish 12 teeth, for example, it took 35 hours of grinding time! But I said, “You can do it. You always found a way in the past.”

The productronica 1977 was at first a huge success for Lach Diamant. At the time, there was a growing demand for electronic circuit boards, and all the big names were present and gathered around the small Amacher machine to marvel at the precise and dust-free machining of PCB, the basic material of circuit boards. I still remember to this day, the doctors of Siemens and NCR, who immediately thought of diamond saws for packet machining of 300mm and 350mm diameters and who spontaneously ordered sample for further experiments. 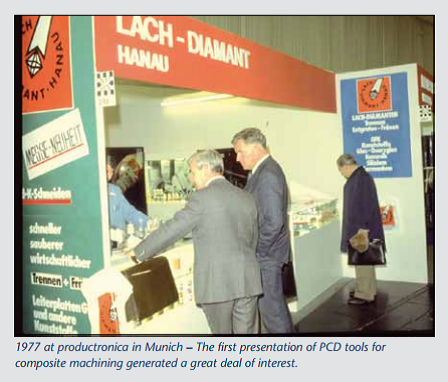 It could have been so perfect. Machining of circuit board materials would have already been possible in a more efficient way since 1977 if only the following would not have happened: “Boss, we really do everything for you, but we can only do one thing. Either we can try to make scorers and saws for circuit boards, or we can continue to serve customers, like Bosch and Kautt & Bux with commutator diamonds.”

That was it for rotating PCD tools. The “grinding” technology delivered only 12 PCD teeth in 35 hours; the facts were very clear. The initial trade show success was gone.

During the following 12 months, I personally had a very unpleasant task. The doctors of expert visitors at the trade show were really “hot” for this technology that had been successfully demonstrated. They assailed me with complaints that we were depriving them of this technology, for whatever reasons. In short, they were miffed.

In reality, the only culprit was this beastly polycrystalline non-growing diamond material itself; even diamond cutters with years of experience capitulated. Again and again, we pondered how we could get results faster and how to conquer this seemingly invincible stuff. 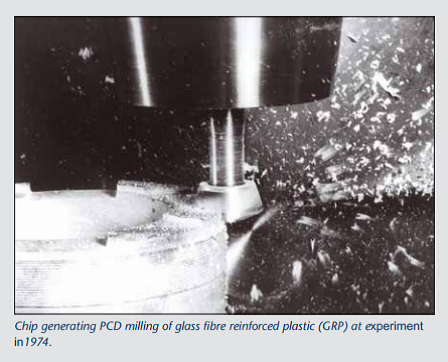 And suddenly, at the end of 1978, a second turning point, which would finally lead to success. Once again via an announcement, this time as a sales advertisement in a Frankfurt newspaper for a spark erosion machine by the company MATRA. I never heard of a spark erosion machine, but I did remember my father mentioning that electricity played a role when cutting natural diamonds on the obligatory cast discs.

We had a good relationship with MATRA Frankfurt, at the time a manufacturer of “state-of-the-art” surface grinding machines. Lach Diamant was allowed to use these machines, especially for experiments with CBN Borazon grinding wheels.

“So, what” I said to Gerhard Mai, our newly appointed master of PCD production, a former diamond cutter, trained at Lach Diamant. “Let’s take a look at this.”

We quickly made an appointment with the two gentlemen in charge at MATRA, Mr. Schreiber and Mr. Becker. “Yes, stop by with your extremely hard-to-grind carbide and we will see what we can do.”

It was a good thing that we had knowingly kept quiet about the fact that our so-called hard metal was PCD. I clearly recall how Mr. Becker greeted us at the entrance and led us into a hall with rail access. Left and right of the entrance were some, at least for me at the time, unidentifiable machines. We stood in front of a machine that I would call some sort of “sinking machine.”

The PCD sample we handed over for the spark test was carefully mounted and disappeared in a “brew,” which I now undersand as a sort of dielectric fluid. The power was switched on, and I could tell from Mr. Becker’s face that he expected our PCD to show a reaction. We took turns to examine the changes with a magnifying lens. Nothing happened—not even during the next five minutes. “Well, I am sorry. Apparently nothing works with this carbide,” he said regretfully.

With the words, “OK, it does not work, but it was worth a try,” we thanked them and were already on our way out of the hall when I suddenly discovered another machine in a corner. It looked slightly different, mainly because of the additional tower-like structure. “What kind of machine is this?” I asked.

“A FANUC wire electrical discharge machine, which is kind of similar to the other,” Mr. Becker replied. “Since you are already here, let’s try another experiment if you’d like. I have to tell you right away that it contains a profile for one of our customers.” I only said, “It doesn’t matter.”

So the sample was mounted again and the machine worked right away in the truest sense of the word—the hot wire actually cut the promised profile out of the PCD and formed it. This visible success surpassed all our expectations. This “beastly material” had finally been conquered for the first time. And on top of that, this experiment had shown us how to produce profiling tools and mills under the influence of spark erosion. A discovery that would show its full value for the future only two weeks later.

But first, I visited our patent lawyer on the next day. The patent number 0010276 for “Herstellung beliebiger profile in polykristallinem synthetischem diamant mittels funkenerosion” was granted and published on April 21, 1982.