Consider a short vise, one that’s 1½" to 2" (38.1mm to 50.8mm) high. Although it is commonly employed for 3-axis machining, it is typically not suitable for 5-axis machining. The reason is that those applications require a vise that provides more elevation to avoid having to apply excessively long tools—“the heart of many problems,” Zaya said. “The fastest and easiest way is to use a taller jaw.” 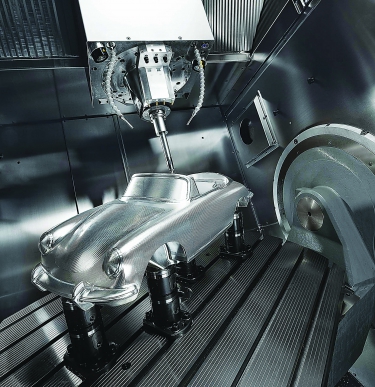 However, he added, if an end user exerts too much clamping pressure, the part can get “squished out” from the jaws because they push the material at an angle rather than perpendicular to the jaw faces. To avoid having a part get extruded out of the jaws requires a tall-jaw vise that has the clamping screw significantly closer to the workpiece to prevent tilting of the jaws.

Another vise option is a modular clamping system that elevates the workpiece and has movable pieces to accommodate workpiece geometry, Zaya said. “The clamping screw is always very close to the top of the mechanism that holds the workpiece in order to prevent extrusion of the workpiece.”

A vise is frequently suitable for five-sided machining, which generally involves a prismatic part that starts as a solid block. However, full 5-axis machining can involve parts without any flat surfaces to grip. “Everything [to be machined] may be interior or underneath it, in which case a vise will not work, because you can’t catch or grab a hold of it from the exterior features.”

When that’s the case, the workpiece is gripped from underneath, Zaya noted, with the addition of a dovetail being a common method. But the dovetail will need to be machined from the workpiece, adding time and expense.

As an alternative, Zaya said BIG KAISER offers a modular, retention knob-based system. This system can even use features on a part’s underside, such as bores and locating pilot holes, to place a knob or bolt and hold the part. “We can work entirely within the footprint of the workpiece, meaning that the bases, extensions and reductions get tucked into the entire footprint.”

Risers are another type of workholding device for 5-axis machining. They are available in monolithic and modular varieties. Selecting the most-appropriate riser depends on the machine tool, Zaya said. For example, because the part is stationary during machining in a gantry-style 5-axis machine, the riser can be as big as needed and made of any material because none of its mass is moving. 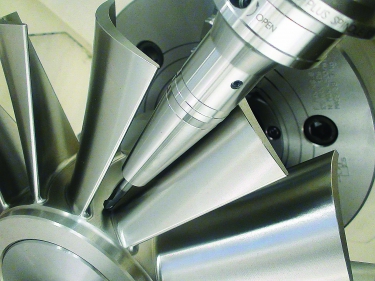 On a trunnion-style 5-axis machine, however, the workpiece tilts and rotates along with the riser. “All of that mass moving and rotating can cause additional momentum that then increases the inaccuracy of the machining center,” he said.

To minimize the mass, a parts manufacturer might select an aluminum riser, Zaya added. “But they are generally very large risers that take up a lot of space on the machine table and don’t provide anything beyond just that capability of high elevation.”

To achieve that elevation without consuming so much table space, Zaya recommends a modular system. This enables users to stack and dismantle extensions and reductions as needed. “You are not adding a solid, monolithic riser that adds a lot of additional mass, momentum and inaccuracy.”

In addition, a pyramid riser allows multiple parts to be loaded per fixture, enhancing a 5-axis machine’s productivity. “It allows you to have higher throughput for smaller or less-complex workpieces,” Zaya said.

Besides workholders, manufacturers targeting 5-axis machining must properly size a machine to the workpiece. Otherwise, having a large machine table could interfere with the spindle housing when producing small parts. “A lot of times a customer will move from the 3-axis world to the 5-axis world and maintain the thought process that ‘I’m going to buy a machine that is still as big as possible—even for machining small parts—just in case I have to do really big parts,’ ” Zaya said. “That’s why some companies that properly size a machine to the workpiece have multiple 5-axis machines of different sizes.”