For those who’ve dismissed vacuum workholding as too inflexible or risky to securely grip workpieces that would otherwise be difficult to hold, it’s time to reconsider.

Lance Nelson, president of 2L Inc., Hudson, Mass., noted there are far more vacuum-workholding choices available than in recent years, largely because shops are trying to avoid using custom fixtures. The company has addressed this need with a series of replaceable top plates, which, according to Nelson, protect the surface of the vacuum chuck when machining through a workpiece. They cost about $200 each.

This also addresses one of the main criticisms of vacuum workholding: its inability to grip parts smaller than 3" (76.2mm) on a side. Mounting edge clamps and similar tooling directly to an aluminum top plate, Nelson said, allows the plate to act as a quick-change fixture suitable for holding the smallest workpieces. 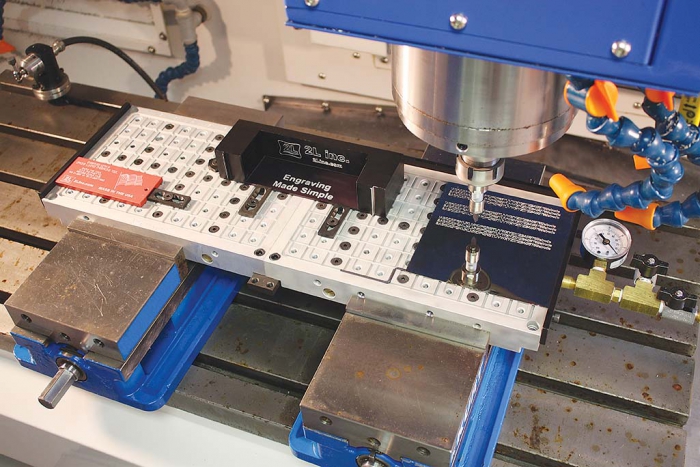 Vacuum chucks can be set up directly on the machine table or, as in this case, placed
in conventional vises for fast changeovers. Image courtesy of 2L.

Nelson added: “We recommend sharp, slow-helix cutters, preferably with a flute angle of 20° or less to reduce lifting and sideway forces. Lighter feed rates and depths of cut are best, especially with smaller parts, where the amount of gripping force is limited. Despite this, vacuum chucks remain an easy and affordable way to hold a variety of workpieces.”

IBAG North America, North Haven, Conn., also has its eye on small-part vacuum workholding. President Bill Popoli said the Witte small-parts chuck IBAG offers features a slotted aluminum plate and a mating plastic pad. Vacuum holes are cut in the pad to match the underside of part locations, which hold the workpieces in place while they are machined, usually from a sheet of workpiece material sitting on the pad.

Flip-Pods are another novel approach to vacuum workholding, although they’re generally not used for small parts. Originally made of plastic and designed for the furniture industry to grip components during routing, Flip-Pods have been redesigned for greater accuracy and load capability, and now consist of a round aluminum body surrounded by a suction cup.

By placing many of these devices on a modular vacuum plate, even large workpieces, such as aircraft wings, can be gripped securely without distortion.

Popoli said the increased variety of vacuum workholders is due in part to the retirement of skilled toolmakers. “It used to be that shops had toolrooms where they would make a lot of this stuff in-house,” he said. “But most of the toolmakers have retired, and people just want to buy things off the shelf now.”

IBAG also offers sheets of porous material that sit on top of vacuum chucks. Air is drawn through the material, creating a vacuum that holds parts in place. In IBAG’s case, this is known as a Micro Porous chuck, and is commonly used to dry-machine metal foils.

A lower-cost but admittedly less-accurate approach is MDF (medium-density fiberboard), the same stuff used to make kitchen countertops. Doug Green, president of Vac-U-Lok, DeKalb, Ill., said using MDF requires a high-flow pump to attain sufficient suction. This is an important consideration when sizing a system, as vacuum pumps often represent a sizable investment. For example, the 40-hp and higher pumps used on gantry mills, where MDF tables are common, can cost $20,000 or more.

Whatever the pump, proper maintenance is important, especially when coolant is applied during machining. Because a vacuum workholder draws cutting fluid through even the smallest air leaks—something Green said are always present—a coolant return should be installed on any vacuum system.

A vacuum detector should also be used, one that’s been connected to the machine tool’s emergency stop or feed-hold circuits. This will halt machining in the event of vacuum loss, preventing damage to people and equipment alike.

Green said vacuum is a viable solution for an array of workholding challenges, but offers advice to shops in high altitudes.

“Most people don’t realize you lose around 4" of mercury [barometric pressure] when you move from sea level to the mountains,” Green said. “This is one reason why we developed our digital safety system, because the folks in Denver automatically lose about half the gripping force compared to those in, say, Marin County (Calif). This doesn’t mean you can’t use vacuum at higher altitudes, just that you may have to compensate with a more-capable pump and pay greater attention to maximizing your gripping area.”