Unless you’re stuck on the side of the road with a flat, you probably don’t give much thought to the tires on your car or the wheels on which they’re mounted. Yet automotive wheels are complex components. They require specially designed tooling and equipment, as well as extensive technical knowledge, to manufacture.

One requirement of precision wheel manufacturing is secure, accurate workholding. But Jay Duerr, president of LMC Workholding Inc., Logansport, Ind., said it goes much further than that. “The biggest requirement in this industry is good customer support.”

Duerr’s customers range from a small manufacturing facility that produces a couple of million wheels per year to a large-volume customer that rolls around 12 million wheels annually out of a single plant. “If they call because they just broke a chuck,” said Duerr of the latter, “you’d better have a new one ready for them in a few hours. You simply can’t shut down a production line running volumes like this.” 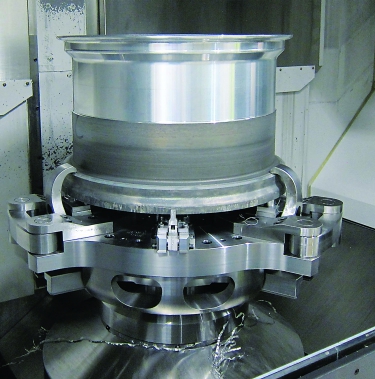 The first operation of wheel turning is one the most critical, and requires a delicate but firm grip. Image courtesy of LMC Workholding.

Another industry requirement is rigidity. That might seem easy to achieve in a wheel chuck measuring several feet across by simply adding more mass. However, Duerr pointed out that wheel manufacturers are increasingly sensitive to energy costs. They don’t want big, bulky chucks on their CNC lathes. “You can’t sacrifice rigidity, but power consumption is a huge portion of the manufacturing cost in this industry. That’s why wheel chucks must be strong but also relatively light.”

LMC’s lightweight-series chuck is an example. The largest grips wheels up to 24" across (610mm) but weighs only 236 lbs. (107kg). Duerr said this chuck—like most wheel chucks—incorporates axial (Z-axis) clamping and radial centering technology and must be delicate enough to not distort thin-walled wheels.

“When you’re running a large chuck like this at 2,500 to 2,800 rpm, it creates some interesting harmonics and deflections that must be mitigated,” Duerr said. “This becomes even more challenging with everything being automated these days—[not to mention] the ever-changing OEM requirements. It’s an intensive process that must be tightly controlled.”

Flexibility is also important. If you walk through a new car dealership or aftermarket parts store, you’ll see that wheels are growing larger and more complex. Wheel manufacturers do not want to invest in new chucks with each passing model year. Therefore, they demand chucks that accommodate an array of wheel sizes and designs, but are still accurate, repeatable and—because wheel lot sizes are often in the 500- to 1,000-piece range—easy to change.

“You have to be as efficient as possible in this business,” Duerr said. “That means satisfying many different requirements.”

Those requirements extend well beyond wheel machining. According to Duerr, LMC has been forced by market pressures to expand into post-machining processes with an array of auxiliary wheel equipment. “We’ve developed a number of patented process and technologies over the past 5 years, and made capital investments of $6 million to $7 million in an effort to stay ahead of our competitors. That’s a big deal.”

One of these big deals is in-line wheel testing equipment. The equipment feeds continuous process corrections to the machine tool. A vision system determines the style of wheel being machined, and automatically adjusts the chuck jaw position and gripping force. In addition, lasers measure the wheels and determine the point of greatest imbalance, and then reorient the wheel in whatever position best cancels that imbalance.

Another very cool wheel manufacturing technology, known as a hub offset, involves machining wheels slightly off-center to compensate for the weight of the wheel stem or tire-pressure monitoring system.

“Sometimes they’ll do it to provide different ride control features as well,” Duerr said. “We’re often looking at ±20μm on feature location. But that’s not as critical as the actual repeatability of the dimension, so that you can pass the Cpk requirements. Wheel manufacturing specifications are very demanding.”

As these specifications grow increasingly stringent, every aspect of the process becomes more difficult, Duerr explained. In the past, a manufacturer would have to worry about one type of wheel on a specific car. Today, there might be 10 different wheel options, making changeover time critical.

Even though wheels are growing in size, automakers are simultaneously pushing to reduce their weight to improve fuel economy. “Of course, that makes the wheel inherently unstable,” Duerr said. “It wants to flex and twist or go out of balance, both of which put additional demands on the workholding. This is probably the most difficult part of wheel manufacturing right now.”