Everyone has spot drilled at some point to start a hole. For a tight-tolerance hole, spotting is required to prevent the secondary drill from walking (the amount the tool deflects from a straight path). Spot drilling creates a location for the secondary drill to enter, acting as a guide.

A spot drill is short and rigid, with a very short flute. It has just enough point geometry to drill an indent in the workpiece. The web on most spot drills is thin, creating a chisel edge with an efficient cutting action. 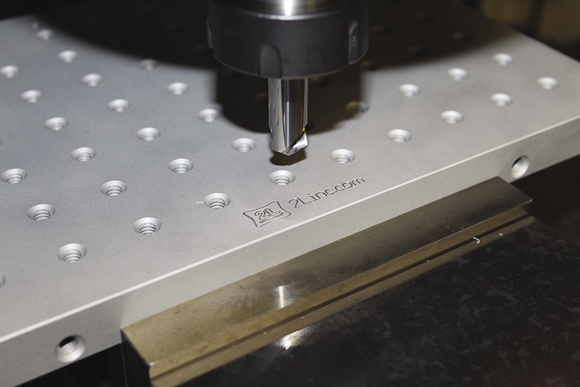 The spot drill is taken deep enough to create the desired chamfer diameter while spotting the hole. Image courtesy 2L.

“The chisel edge is the very center of the drill where the two flutes leave a little bit of material between the two of them,” said Bob Hellinger, national sales manager, standard products for Guhring Inc., Brookfield, Wis. “That chisel edge doesn’t cut—it tends to push the material. Drills with large chisel edges wander more than drills with reduced chisel edges. A spot drill has a very thin chisel edge.” Guhring offers HSS and carbide spot drills.

Drills with split points reduce the need for spot drilling. “A split-point drill is self-centering in that the chisel edge is reduced to almost zero,” Hellinger said. “However, the split point is a little harder to apply in manufacturing. Drills with a 135° point angle often have a split point because they are recommended for harder materials.”

The higher the length-to-diameter ratio of a drill, the more apt it is to walk. A long drill can deflect when it initially contacts a flat surface, making spot drilling necessary. Some drill makers agree that for holes more than 5 diameters deep, spotting is needed. Others say that threshold is 7 or 8 diameters deep or more.

“Spot drilling also may be used if you are not drilling into a flat surface, say into a 10° to 15° angled surface or a large radius,” said Ben Davis, national product manager for drilling, Iscar Metals Inc., Arlington, Texas. “The spot drill can slightly flatten that area before you do the drilling.” He added that other tools, such as an endmill, can also flatten a surface.

A spot drill, like this one from Guhring, is short and rigid, with a very short flute. Image courtesy Guhring.

Many machinists use a spot drill to create a chamfer when they will be tapping or reaming a hole. “The chamfer allows for a smooth lead into the hole,” said Susan Valenti, product manager–holemaking for Ingersoll Cutting Tools, Rockford, Ill. Ingersoll’s Y-Series quick-change, replaceable-tip, extended-length spot drills are offered in 90° and 140° styles.

Some users aren’t sure what the point angle of the spot drill should be compared to the secondary drill. “Everyone takes it for granted that it is understood, but people do ask us a lot what angle to use,” said Lance Nelson, president of 2L inc., Hudson, Mass., which sells solid-carbide spot drills with 90°, 120° and 145° point angles. A spot drill has a very thin chisel edge compared to a standard drill. The chisel edge does not cut material; it pushes or displaces it. Image courtesy Guhring.

“Secondary drills typically have point angles of 118°, 120° or 135°, and some stronger ones are wider than that,” he continued. “Some people use the 145° spot drill for a 135° point-angle drill. When you get into tougher materials like stainless or Inconel, it takes more of a toll on the secondary drill, so it’s important to use the 145° spot drill. However, most people just use whatever they have in their shop—such as a 90° spot drill for any application.”

Most toolmakers agree the point angle of the spot drill should be equal to or larger than the secondary drill’s angle. The drill should make contact with the starter hole at the drill’s tip, not its cutting edges. This eliminates undue stress on the drill’s edges, which would cause premature tool failure and reduce hole quality.

Nelson said: “You want the spot drill to have a larger point angle so when the secondary drill goes in, its tip touches the bottom of the hole and finds the center. Then, as the drill plunges into the hole, its edges contact the hole edges at the same time. It prolongs the life of the secondary drill.” Guhring’s Hellinger said the rule of thumb that the spot drill should be flatter than the secondary drill is true in terms of carbide drills. “However, for HSS and cobalt secondary drills, you want the cutting edges to engage the workpiece before the chisel edge (tip) of the drill,” he said. “On an HSS drill, the cutting lips aren’t as fragile as on a carbide drill, so you want to contact the cutting edges before you contact the chisel edge. The chisel edge, again, doesn’t cut so it will skate or wander if it engages the workpiece first.”

So, are the speeds and feeds for spot drills the same as the secondary drill? “Proper speeds and feeds depend on the workpiece material, insert substrate and coating, as well as the drilling application itself,” Allied’s Gray said. “Generally, spot drilling utilizes slight reductions in surface feet per minute and reduced feed rates. Your goal when spotting is to provide a good starting location for the secondary drill, so you really don’t need the high penetration rate. Just give the drill a chance to establish and run true.” Most solid-carbide drills typically do not need a starter hole because they are rigid and resist walking. Most are self-centering; they are designed to start their own hole. Spot drilling the workpiece before using this type of drill may even be counterproductive, causing the edges to chip or break. If required, Gray recommends creating a shallow spot for a solid-carbide secondary drill. “Measure the web of the carbide drill and use this thickness as the spot drill depth,” he said. “This provides a small spot to guide the secondary drill without placing it under excessive stress.”

Shops sometimes use a center drill to make spot holes, but the drills are not designed for that. The purpose of a center drill is putting a hole in the end of a part to secure it in the tailstock of a lathe or to mount it between centers for grinding.

“Center drills are combination drill and countersink tools, which are not the best tool for spot drilling,” Hellinger said. “They are actually a step drill and create two different spot angles—a 60° pilot hole with a 90° countersink on the top. The secondary drill encounters the countersink angle at the top of the starter hole and then a different angle at the bottom of the hole created by the pilot portion of the center drill. This creates an opportunity for the secondary drill to wander.”

More than a Spot

Spot drills have evolved and are no longer “just spotting tools,” according to Valenti. For instance, Ingersoll’s Spot-In FAK indexable spotting tools are offered in 82°, 90°, 118°, 135° and 140° styles for a variety of operations: spot drilling, countersinking, engraving, chamfering and edge deburring.

A center drill (top), which is usually double-ended, is sometimes used for spot drilling but is not as accurate as a true spot drill (bottom). Image courtesy Guhring.

Iscar also offers tools with interchangeable carbide bits, such as the SumoCham drill or the Multimaster, which is intended more for milling but can perform chamfering and spot drilling. “However, we recommend you create more of a prehole than a starter hole,” Davis said. “Basically, you prehole with a short drill about 1 diameter deep. A prehole is within an H8 tolerance of the secondary drill with a drill point the same size or larger than the secondary drill. The prehole supports the drill margin as well as the point.

“We recommend taking the drilling tool and putting chamfering bits on it,” Davis added. “The drill will be a step drill with a drilling insert on the end and chamfer inserts toward the back of the drill, allowing for drilling and chamfering/counterboring with one tool.”

As cutting tool technology improves, spot drills are becoming less important because users can drill straight holes
with longer drills. Allied’s Gray agreed and noted the high quality of today’s
tools and machines often eliminates the need for spot drilling, reducing cycle times and tool inventories. “But, again, it depends on the application. You have to ask yourself if a spot drill is really needed.” CTE