Tank Components Industries, Springfield, Mo., produces cylinders, heads, fittings and other parts for manufacturers of tanks and vessels. TCI machines the parts from stainless steel and nickel-based alloys in a variety of sizes; tank head diameters range from 9 " to 118 ", and workpiece material thicknesses vary from 12-gauge to ½ "-thick plate.

According to Bryan Perry, maintenance supervisor, the tramp oil floated on the surface of the coolant and formed an air barrier “like moss on a pond.” That enabled anaerobic bacteria to multiply in the coolant, often causing it to spoil within a week.

Perry minimized the smell by regularly draining the coolant from the machines and cycling cleaner through them. “To clean a small machine takes about 5 hours,” he said. “We have one machine that holds 130 gallons of coolant. That machine takes 2 days to clean. I have to stand there with a hose while the cleaner cycles to keep the sludge from collecting at the bottom.” Cleaning all the shop’s machines, he estimated, consumed more than 40 hours. Added to the time and labor cost of cleaning was the expense of replacing the coolant. 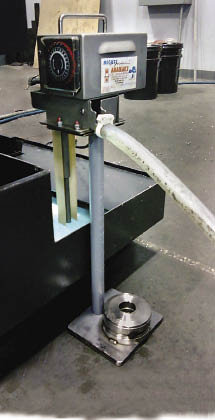 TCI fabricated a custom universal mounting stand for the company’s Abanaki oil skimmer to facilitate moving it among the different kinds of machine tools in the shop.

To solve the problem, TCI purchased a Mighty Mini SST oil skimmer from Abanaki Corp., Chagrin Falls, Ohio. The compact, belt-style oil skimmer works in coolant sumps and other tight locations. Oil sticks to its rotating belt, and wipers scrape the oil into a collection container. TCI chose the Model SMMS-1-12 Mighty Mini, which has a 1 "-wide × 12 "-long belt.

The skimmer belt is made of Abanaki’s standard polymer material, which is textured to retain a small amount of oil and thereby draw more oil on subsequent passes. Abanaki President Tom Hobson said the tramp oils in machine tool coolant reservoirs usually are “gray oils. They are slightly emulsified, but they’ve also got some of the cutting dust in them.” A drop of gray oil will generally have slightly more oil than coolant. “It will float, but on the outside it is still water. Typical oil skimmers won’t pick that up. We make a belt that will get that gray oil,” he said.

According to Perry, the skimmer’s effectiveness at TCI is obvious. “I can see the oil skimmer working, oil clinging to the belt and getting scraped off,” he said. “On one lathe, I collect three-quarters of a gallon to a full gallon of oil every week.”

The coolant color itself is an indicator. “My coolant is light blue, but it turns black in a week if I don’t skim. If I put the oil skimmer on that machine, in 2 days the coolant will be blue again,” he said.

To facilitate use of the 7-lb. skimmer on the shop’s different machines, Perry fabricated a custom mounting stand. It fits all the machines without adjustment. “I tried to make it as universal as possible. I measured all the machines and cut the pipe to fit what I needed, so I just had to have one size,” he said.

Perry said the skimmer’s integrated, 24-hour timer enables it to run through the night. The shop operates two shifts daily. “I rotate the skimmer from machine to machine about every 2 days,” he said. “I’ll let it run during the day, and at night, when nobody is here, 15 minutes on and 15 minutes off.” The skimmer can do its work while the machines are making parts because it removes oil from the coolant reservoir and therefore doesn’t interfere with production.

Perry estimates that skimming once a week makes the coolant last 50 to 100 percent longer. And, in addition to spending less money on coolant and cleaner, TCI is saving a lot on labor, he said. “I won’t have to clean the machines for a while. I figure that the oil skimmer paid for itself within 6 months.”