Drilling is unambiguously defined as a cutting process that creates or enlarges a circular hole in solid materials. Deep-hole drilling, then, seems as though it would have a similarly clear definition. The drill is creating or enlarging a particularly deep hole—what more is there?

Unfortunately, there’s no longer a generally agreed-upon definition of a “deep hole.” In the mid-1990s, anything deeper than 3 diameters was considered deep, according to Jason Hout, product manager at toolmaker Sandvik Coromant Co., Fair Lawn, N.J. Today, it’s not uncommon for a job shop to makes holes in excess of 10 diameters on a conventional machine tool, with specialized machines capable of reaching 100 diameters or more. 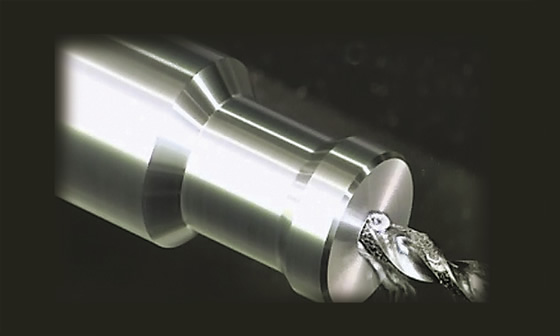 “The capabilities of conventional machine tools are so different now than they were just a couple of decades ago that the definition of ‘deep’ has become very obscure,” Hout said. “In my opinion, the term ‘deep hole’ is almost arbitrary.”

While a strict definition of deep-hole drilling may be hard to pin down, there are some rules of thumb, according to Brian Welch, regional manager for toolmaker Allied Machine & Engineering Corp., Dover, Ohio. “I would consider something in excess of a 20-to-1 ratio to be deep, but depending on the job, deep-hole techniques might come into play at ratios as low as 7 to 1.”

Regardless of the number of diameters, how does a parts manufacturer determine what drill is needed when going deep? When drilling deep holes on a conventional CNC machine tool, there are three main options: a spade drill, a twist drill and a gundrill.

The spade drill holds the distinction of being the fastest and, according to Welch, new spade geometries and holder designs have allowed for improved hole quality at even faster speeds.

“Our engineering and manufacturing capabilities have been rapidly evolving, especially within the last 5 years,” Welch said. “This has led to results from our engineered specials that people haven’t seen before. 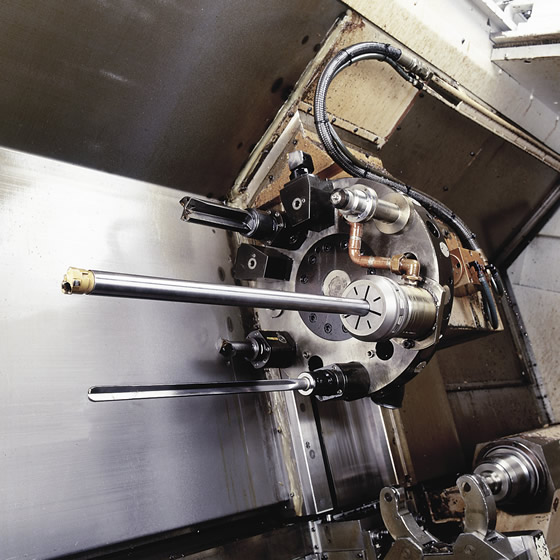 “The thing about spades is they’ve been around forever, and people have a perception of what a spade drill is and how it performs,” he continued. “The reality is, we have developed deep-hole drilling solutions with spade drills and toolholders that perform beyond expectations.”

However, even with those advances, there are still factors to consider in order to maximize performance, such as chip formation and coolant flow. To that end, Welch said, Allied offers T/A holders specific to the coolant environment and T/A inserts specific to the material being drilled.

The downside is spades can generate a “generic” hole and are not generally capable of achieving the tight tolerances and fine finishes required in some applications, according to Hout.

“The finish isn’t going to be pretty, its overall accuracy is probably going to be ±0.0030 ", and it would probably be at its best at depths below 15 diameters,” he said. “That said, for someone like an automotive manufacturer looking for weight reduction in a transmission, a spade drill would be more than adequate, and, with a penetration rate of potentially 5 ipm, it will give the lowest cost per hole.”

Within the realm of twist drills, various options exist, depending on whether or not you have access to through-coolant capability. According to Brandon Hull, director of product management and business development for Brookfield, Wis., cutting tool manufacturer Guhring Inc., an HSS or cobalt parabolic-flute drill is the ideal choice for making deep holes if through-coolant is not available.

“[A parabolic-flute drill] is extremely efficient for deep holes because the larger flute opening aids in chip evacuation, meaning you can drill with fewer peck cycles,” he explained. “If you have a 0.500 " drill, for example, instead of pecking every 0.145 " deep, the way you would with a standard-flute form, you can sometimes go up to 5 diameters without pecking.”

Pecking, or withdrawing the drill from the hole to remove chips, can introduce problems, especially in deeper holes, he explained. At every peck cycle, there is an opportunity for a chip to get in front of the drill tip, reducing cutting efficiency and potentially increasing runout. Some newer machines combat this with a chipbreaker cycle, which partially rather than fully retracts a drill. This allows the drill to create chips without allowing chips to get in front of the point.

However, with high-pressure coolant, pecking is unnecessary, and a coolant-fed carbide twist drill brings a plethora of advantages. “It’s one of the fastest ways to drill a deep hole,” Hull said. “The problem is, they can be very expensive compared to a gundrill, but your productivity increase is huge—five to six times, potentially more. You’re going to get better chip evacuation, and you can drive the drill much harder. If you can afford it at the outset, you’ll save money in the long run.”

Of course, it’s virtually impossible to discuss deep-hole drilling without mentioning the gundrill. Its concentricity and ability to impart a fine finish are unmatched, and it is capable of drilling more than 100 diameters deep, but the trade-off comes in the form of reduced productivity.

“If you’re looking at what tool gives the highest-quality hole regardless of penetration rate, a gundrill is the way to go,” said Sandvik Coromant’s Hout. “A gundrill might cost more than a standard twist drill, but you’re going to get 15 to 20 reconditionings out of a gundrill, and it will consistently produce a hole to a 0.0005 " tolerance. That twist drill will run a lot faster, but you can only hope to hold a ±0.0020 " tolerance, and you can’t expect as fine a finish.”

Many shops gundrill on CNC machines instead of using dedicated gundrilling machines, said Guhring’s Hull. “What it comes down to is the guide method. No matter what you’re doing, you still need to drill a pilot hole to guide that deep-hole drill.” 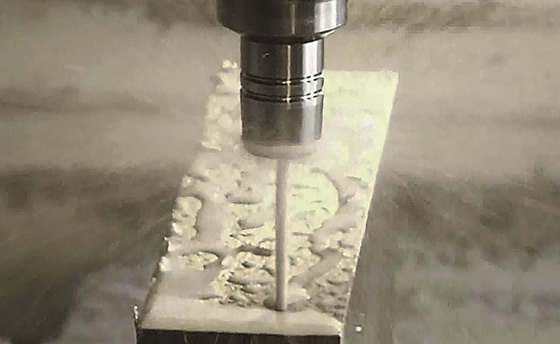 A pilot hole, he continued, is typically 1 to 2 diameters deep using a drill with a smaller diameter. The longer gundrill is run at about 300 rpm as it enters the pilot hole, and, once it is fully engaged, drill speed can be increased to the maximum allowable for the job and the coolant is activated. “That method is the same whether you’re using a gundrill or a coolant-fed twist drill,” Hull said.

James Martz, sales manager for Leese & Co., said his shop uses a dedicated gundrill and a CNC machine with deep-hole capabilities. Drill guides enable the Greensburg, Pa., machine shop to get the most out of its equipment.

“There’s a steady rest that supports the drill, and as it goes down into the hole, the steady rest moves and you’ve got another one that takes its place,” he explained. “As the drill enters the part, there’s a rest 2 " from the part at any given time. By using the steady rest feed and adjusting the feed rate on the drill, we are able to maintain concentricity in our parts and produce a better, more reliable part.”

According to Guhring’s Hull, there are two major concerns when buying a CNC machine tool for deep-hole drilling: toolholders and machine features. Hydraulic chucks and shrink-fit toolholders offer the lowest runout, making them ideal for deep holes.

“The quality of toolholder, simply stated, is going to be the most important thing to look at, no matter what kind of drill you’re using,” he said.

As for the machine itself, the most important feature is coolant pressure, followed closely by spindle quality, according to Hull.

While 250 psi is the “absolute minimum” suitable coolant pressure, he recommends 1,000 psi for gundrills compared to half that for twist drills. “With insufficient coolant pressure, you simply won’t be able to get the necessary chip evacuation.”

He added that while many older machines may be perfectly suitable for deep-hole drilling, a concentric spindle is an absolute must.

Also, some of the more modern features available make deep-hole drilling considerably easier than it was for machinists in the past while reducing scrap.

“When drilling, especially with deep holes, you really want to avoid breaking the drills,” said Christian Klanica, president and owner of Leese & Co. “To that end, one of the key features for us is automatic shutoff. If you’re putting too much stress on the drill, the machine shuts down. Older machines will run until the drill breaks, at which point you’ve not only lost the drill, you’ve lost the part it’s in.”

Ultimately, no matter the shop or the application, the choice of the tool should be based on the part requirements. With some general considerations for the machine tool and clear knowledge of the options available, the ill-defined deep hole need not be any more intimidating than any other hole. CTE 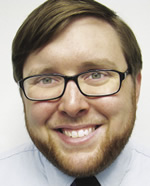 About the Author
Evan Jones Thorne is assistant editor for CTE. Contact him at (847) 714-0177 or ejonesthorne@jwr.com

While standard machine tools can certainly be used for deep-hole drilling, there are several advantages to using specialized drilling machines in some applications.

While a gundrill may not be the fastest drilling method, Jim McGaffin, product manager for Absolute Machine Tool Inc., Lorain, Ohio, said the concentricity and surface finish simply can’t be beat.

“On a dedicated gundrill, the part is counter-rotated in the opposite direction of the drill,” McGaffin said. “Even the best horizontal or vertical drills will have looser concentricity, because they lack counter-rotation.”

In addition, he continued, exotic materials, such as Hastelloy and Inconel, pose no issue for a gundrill’s high-torque motors and high-pressure coolant. 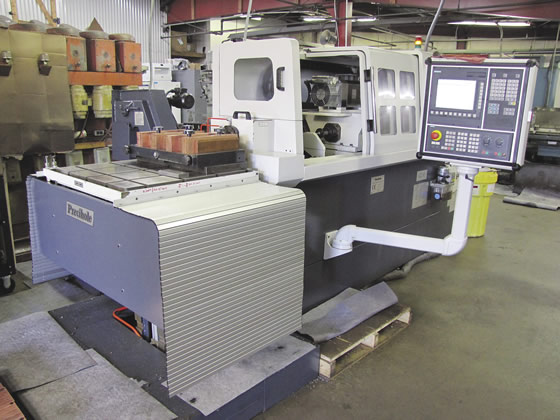 Leese & Co. uses a PreciHole Micro Gun Drilling Machine from Absolute Machine Tool for many of its deep-hole applications.

“You really won’t see a drop in feed rates, concentricity or surface finish [with a gundrill],” he said.

For example, the Precihole Micro Gun Drilling Machine, distributed in North America by Absolute, is for high-concentricity medical applications, such as bone screws. McGaffin explained that the centers of bone screws are drilled in part to reduce weight, but also so that they can bend when necessary; a concentric hole is essential to allow the screw to bend properly. The Micro Gun Drilling Machines can drill counter-rotated holes from 0.040 " to 0.250 " (1.016mm to 6.35mm) in diameter at spindle speeds of up to 25,000 rpm.

“Due to a flexible positioning of components like the tank, chip conveyor and centrifuge, the TIBO machines can be customized to a customer’s floor space,” he said.

“If a dedicated deep-hole machine is available, that would be my first choice because it gives the best of both worlds,” added Sandvik Coromant’s Hout. “You’ll see the highest-quality hole and the highest penetration rate.”