For shops that haven’t invested in the right equipment, cleaning the sump on a machine tool is a dirty, tiring job. Depending on the machine configuration, several pieces of sheet metal must first be removed. Hoses and electrical connections come next, followed by the often-herculean effort needed to position a sludge-filled tank far enough from the machine that access with shovel, suction hose and plenty of shop rags becomes feasible.

Once clean, the now-weary machinist must haul a seemingly endless series of 5-gal. buckets of fresh cutting fluid back to the machine and dump them into the sump. Chips and puddles are everywhere, and an hour or more of production time has been lost.

Sound familiar? If so, you’re not alone. According to those interviewed for this article, 70 percent or more of all shops clean their sumps in a similar manner. Because the job is such a hassle, most wait far longer than they should, creating a host of problems. 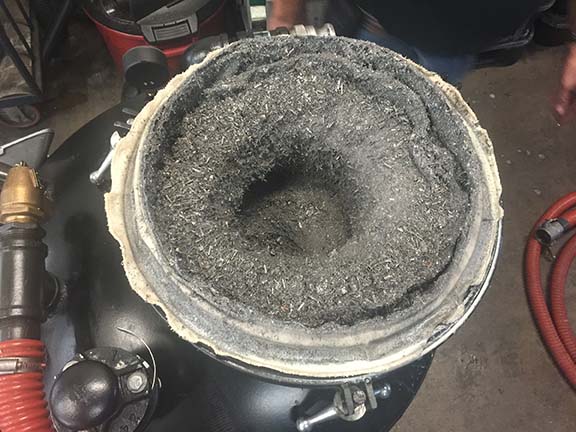 This filter basket offers a good indication of the oily gunk hiding in most machine sumps,
which creates a prime breeding ground for microorganisms. Image courtesy of CECOR.

Dermatitis and dry skin are common with neglected cutting fluid. So, too, is the “morning stink” caused by microorganisms munching overnight on their favorite food: tramp oil. And from a productivity perspective, the worst—but often least obvious—problem is the gradual degradation of cutting tool performance and part quality that comes with dirty or tired cutting fluids.

One simple measure even the most cash-strapped shop can take is to install of a tramp-oil skimmer on each machine tool. Tramp oil is comprised of lubricant that collects on way surfaces or escapes through small leaks in bearing and gearbox seals before traveling through a machine and into the chip pan and sump. Much of this oil then floats to the surface of the cutting fluid in the sump, ready for capture.

Wayne Products, Broomall, Pa., developed the Mini-Skimmer and Maxi-Skimmer oil skimmers to remove tramp oil. General manager Don Ware said these low-cost devices mount directly on the sump. A small hole is cut in the sump’s sheet metal, allowing a skimmer’s pulley-driven belt to extend into the cutting fluid. As the vertically situated belt slowly turns, it drags tramp oil up and out of the sump, where a blade scrapes it into a receptacle. The company also offers models that fit in the bung hole of a 55-gal. drum and tube-style skimmers for enclosed sumps and tight areas. 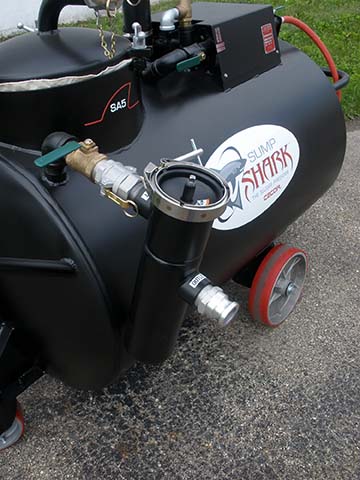 CECOR’s Sump Shark has a discharge filter for cleaning fluids
before disposal or recycling.  Image courtesy of CECOR.

“There are many benefits to removing tramp oil,” Ware said. “Not only does it increase tool life, it also improves the possibility of coolant recycling and saves a lot of money. And from the operator’s point of view, it’s better for his skin, lungs and general well-being.”

Most oil skimmers sell for a few hundred dollars. Ron Wendt, product manager at Eriez Manufacturing Co., Erie, Pa., agreed that tramp-oil removal is a necessary part of cutting fluid maintenance,  and said a number of other regular activities must also be performed.

“In most situations, you should check the cutting fluid concentration daily,” he said. “If you don’t keep it at the level recommended by the manufacturer, and, especially if you let it run lean, you’ll always be fighting an uphill battle.” Wendt added that the pH level should be monitored regularly with  a test strip or electronic meter.

The concentration of cutting fluids is checked with a hand-held device called a refractometer. The user places a few drops of cutting fluid on the glass, closes the lid and holds the refractometer up to a light source while peering through the opposite end; the concentration level will be clearly displayed as a percentage of the mixture of water and cutting fluid, which most fluid manufacturers suggest should be from 8 to 12 percent. Wendt recommends digital refractometers, as they are more accurate and easier to read than analog models and offer automatic calibration and temperature compensation. 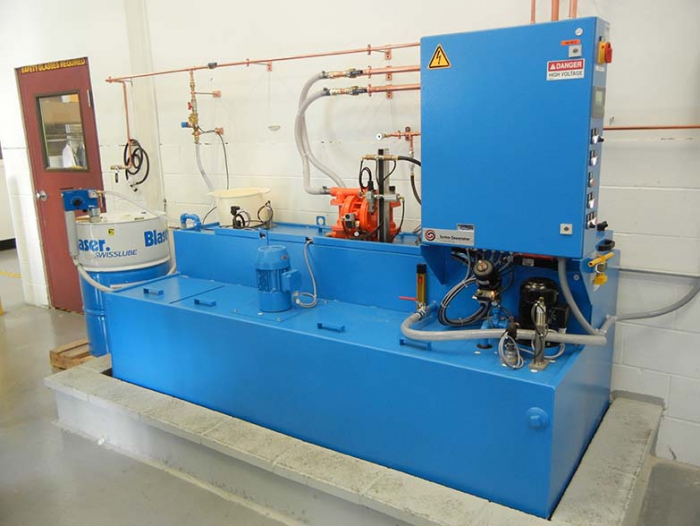 Some shops plumb the production area with vacuum lines to clean machine sumps and pressurized clean-fluid lines
for refilling them. Image courtesy of Sanborn Technologies.

“No matter what you do, small fines accumulate in the bottom of the tank,” he said. “Even with a skimmer, there’s always some tramp oil present, which grabs onto these fines and creates the black sludge most of us have seen in machine sumps. Anaerobic bacteria love this stuff, and there’s no way to kill it by adding chemicals or bactericides. About all you can do is clean the sump at regular intervals, depending on the number of shifts, the materials you’re cutting and the type of coolant. Once a quarter is a good starting point.”

Fortunately, there are much easier—and faster—ways to clean a sump than using a shop vac and big bundles of rags. Eriez sells an array of fluid filtration and recycling systems, including portable devices, that make cleaning a sump about as easy as running your pickup truck through a car wash.

“I visited a shop once that bought a $2 million machining center 2 years earlier and had never changed the cutting fluid,” he said. “People often don’t see the importance of it or recognize the toll improperly maintained fluid takes on tool life and the operator.” 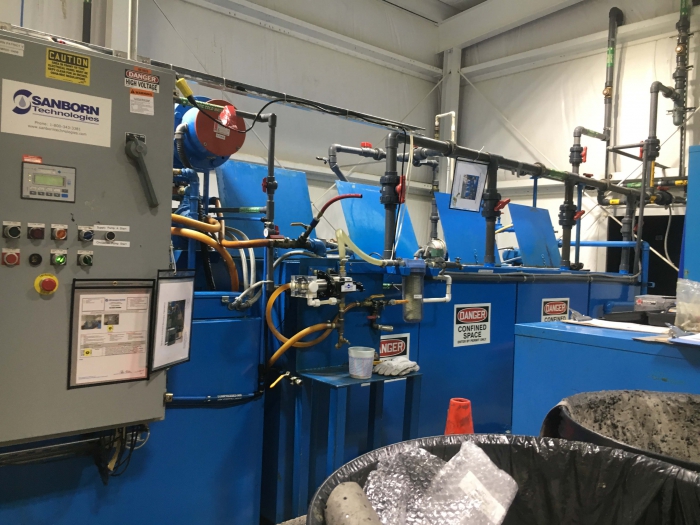 Other often-overlooked negatives of the pail-and-shovel approach are slippery floors, the risk that comes with lifting heavy objects and future health problems. These may lead to litigation and higher insurance premiums. Add to those the negative environmental impact and expense incurred from hauling and disposing of used cutting fluids and you have to ask: How can shops not implement a routine maintenance and recycling program?

This becomes increasingly evident when one considers the cost of sump cleaning equipment. CECOR, for example, sell units for under $10,000. Its Sump Shark can be wheeled to a machine to completely empty a dirty sump at rates from 60 to 110 gpm. Dual-tank models can immediately refill the just-emptied machine with clean coolant, making the entire operation a 10-minute-or-faster affair. “Our unit makes sump cleaning easy, fast and safe,” Urso said.

James West, general manager at Sanborn Technologies Inc., Walpole, Mass., said cutting fluids are much more stable now than they were even 10 years ago. This means less stink and longer life, but it also means that shops may not realize their coolant has gone bad. The lack of awareness about a fluid’s condition makes cutting fluid maintenance doubly important to prevent problems with tool life, surface finishes and operator complaints about itchy arms. 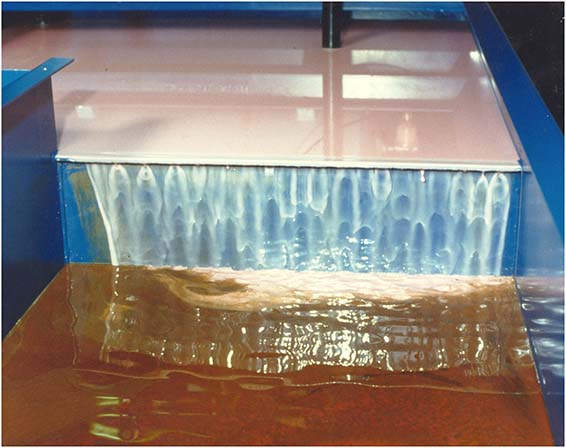 According to PRAB, overflowing the clean side into the dirty provides additional filtration
when recycling cutting fluids. Image courtesy of PRAB.

Sanborn offers large and small coolant separation and recycling systems, and West pointed to the company’s portable Freddy as a popular choice for small shops wanting to test the coolant recycling waters. “What’s unique about it is the ability to suck dirty fluid out of the machine while simultaneously pumping high-velocity filtered fluid back in,” he said. “This might seem counterintuitive, but the jet of clean fluid helps blast particulates out of hard-to-reach areas and keep fines from redistributing on the bottom. It also avoids the need for a tank large enough to hold the entire volume of the sump, so the unit is easy to move around.”

Thomas Tripepi, technical director at PRAB Inc., Kalamazoo, Mich., agreed that sump cleaners have their place, but said a dedicated recycling system is often best for cleaning cutting fluid once it’s removed from the sump, especially for shops with 20 or more machines.

“Most of our systems use some type of paper or bag filter, followed by a coalescing separator,” he said. “We then run the cutting fluid through the system several times, repeatedly overflowing the clean side back into the dirty in order to get it as clean as possible.”

Dirty fluid is typically transported to and from the recycling system using the sump cleaner itself, most of which can suck dirty fluid out or pump clean fluid back in. Tripepi said some shops will run an overhead line to each machine, so all the operator has to do is grab a hose reel, open the nozzle and fill the machine with coolant after cleaning.

Tripepi said payback on a central recycling system is often measured in a few months to a year or two. This is largely because of the high price of cutting fluids, which often costs from $15 to $50, or more, per gallon, as well as the reduced downtime and labor savings gained by cleaning sumps in minutes rather than hours.

“The value with one of these systems is that you’re not paying to haul coolant away, you avoid the liability that comes with its disposal, and you’re not buying nearly as much new coolant,” he said. “But more importantly, and this is the part most people have a hard time recognizing, you also save money on cutting tools.

“We’ve heard reports of up to 200 percent reduction in tooling costs,” Tripepi continued, “but we tell people you’re probably going to save at least 50 percent through regular cleaning and filtration of cutting fluids.”

Temperature Matters to a Skimmer Belt

A great deal of variance exists in applications where belt skimmers are present. Choosing the best belt material depends on several factors. For the most part, different belt types function in the same fashion by breaking the surface tension of a fluid to draw oil to the skimmer, so the main goal is finding which belt material will provide the longest operating life. The two factors that most impact belt wear life are a fluid’s temperature and pH level.

Some skimmer applications involve high fluid temperatures—from 180° to 190° F (82° to 88° C). A high level of heat is problematic two ways. First, heat can make the acidic or alkaline chemicals in a fluid more aggressive by increasing the rate of chemical reaction. Second, heat may shorten the life of a polymer belt, essentially “cooking” the plastic.

When discussing plastic belts, it should be mentioned that a pH level that’s too high or too low can cause failure at the belt seam, where the belt was heat-welded together. The same conditions cause steel belts to become brittle.

Other variables also impact belt performance. Coolant containing swarf, sand and other debris can abrade a belt. On a steel belt, the abrasion is typically seen at the belt edges, where small cracks can be found. Polymer belts, on the other hand, are more tolerant of grit, because they are more flexible than steel.

In addition, most coolants contain rust inhibitors, which may reduce a belt’s oil-collection efficiency. Therefore, polymer and elastomer belts are often recommended over steel belts for coolant-skimming applications.

If a belt material is not suitable for an application, oil will not adhere to the belt or the adherence will be suboptimal, which slows the rate of oil removal and may leave more trace oils unskimmed. In addition, an incorrect belt choice can lead to premature wear.

To help choose the correct belt for an application, request free samples of available belt materials from a manufacturer for testing an oil’s ability to stick to them.

Before conducting tests, discuss the application with your supplier to narrow the options. The discussion should include the application’s medium, temperature, chemicals that are present and oil viscosity.